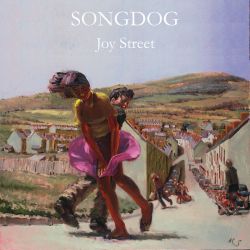 A new album from Lyndon Morgans, aka Songdog, is something to be eagerly anticipated, then played endlessly and treasured once it appears.  There truly is nobody else like him, nobody who does what he does and precious few as good.  In a more just world he’d be the subject of adulatory profiles in the broadsheets and sell out the finest concert halls in the land.  In this one though he’s a secret, garlanded with critical acclaim but clutched to the breasts only of those in the know, who hang on his every word and every song as if they were gold dust, which of course they are.

His latest outing, while not exactly breaking new ground, certainly seems to find him in a more positive mood than previously.  Long-time fans may be surprised by It’s Not a Love Thing, which is positively bouncy with a delightfully catchy chorus, the latter trait also found in the following The Old Superhero, while the list of things that Morgans likes that is Raise your Glass In Praise is a celebration, though of course his list isn’t quite what you might expect, featuring empty playgrounds, grassed over graves and amyl nitrate amongst others.

Elsewhere there’s a glorious sadness to songs like A Ukulele Whizz Looks Back and the title track, suffused as they are with melancholy and regret, and throughout there’s the trademark noir-ish imagery, intensity, insight and perfectly judged metaphors, all delivered in Morgans’ high and heartfelt voice.  The production by Nigel Stonier is spot on, the band hit their marks every time and the result is a set of songs that makes you think and touches your soul from a man for whom the word genius would not be an overstatement.

Superb set of melancholy, empathy and darkness with a few cracks for the light to get in.