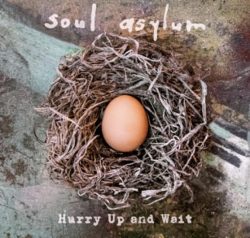 Soul Asylum, the Grammy award-winning band, are back for the first time in four years with their album ‘Hurry Up and Wait’, sporting a different line-up to their most successful era of the early 90s, but one brimming with talent, consisting of the ever-present Dave Pirner (lead vocals), Ryan Smith (lead guitar), Winston Roye (bass) and former Prince drummer Michael Bland.

Fittingly, the album starts with ‘The Beginning’ and it is exactly what you expect from a successful rock band. It feels as though the album is what Pirner wanted the album to sound like, and rather than bartering to the modern Americana feel of the 2020s, it feels much more like a 90s rock song. As Pirner sings, ‘This is the beginning of a great adventure’ – we feel like that is how the album will feel throughout.

Next up you have ‘If I Told You’, the lead single of the album. It’s got the classic Soul Asylum feel with chiming riffs and evocative guitar solos, and you really feel like this is the song that could teach some up and coming bands about how to write a great alt-rock song.

But you really feel that the album is from a different era, and perhaps that’s what makes it so appealing. ‘Got it Pretty Good’ feels like a UK punk rock song from the 1970s with the powerful call-backs and repetitions of phrases. This alongside the Stones’ inspired ‘Make Her Laugh’, a laid back but nevertheless great song helps encapsulate this feel of an older era album.

The middle of the album seems to drop off a bit and isn’t as entertaining but that changes when we hit the song ‘Landmines‘ and the fun and upbeat style explodes (forgive my pun). We hear a much raspier voice in this song and again we get this feel of an older pop-rock song that is nice and different from the mainstream Americana scene.

Overall Soul Asylum are bringing back their vibes from the 90s into the modern Americana scene, creating a fun album in the process.

In this time of pain and suffering, stay safe and listen to some music. Support your favourite unsigned acts. Buy a CD or a t-shirt. Any money will go a long way in keeping something we enjoy so much from disappearing.

A triumphant album by an Americana great