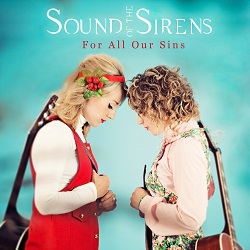 The press release for the debut album from Exeter-based duo Sound of the Sirens paints a rather misleading picture of an (incredibly English) take on Americana. To suggest there is any parallel to be drawn between Sound of the Sirens and The Everly Brothers, George Jones or Tammy Wynette is simply bizarre and will have anyone with a penchant for vintage country raising at least one eyebrow, if not two. Championed by no less that Chris Evans and sharing stages with the likes of (dare I say it…) Rick Astley, the duo have certainly found favour in an increasingly fickle and frustrating industry, but country music this ain’t. As the duo work their way through ten solid but often all too brief tracks (seven of the songs clock in at around or just less than three minutes), the tone they strike consistently would most comfortably be filed under ‘J’ for ‘jangly acoustic pop’.

However, notwithstanding any criticism of the band’s press release, there is little to dislike about any of the songs presented as part of this collection. Erudite, catchy, heartfelt, lyrically complex, and sometimes a little too theatrical could and would all be fitting descriptors of their MO… songs like In This Time, with it’s rather beautiful a cappella coda, and Smokescreen feel like the logical extension of Kirsty McColl’s canon. Elsewhere the the duo evidently channel influences as diverse as 10,000 Maniacs (Grow), REM and early ’90s Crowded House (Chaos – probably the best song here) but with a lot of ground covered (arguably a little too much ground) in a short space of time and a tendency for overworking their ‘musical dough’, the constituent parts are, in this case, greater than the sum and overall, the album as a whole isn’t as remarkable as the handful of standout tracks therein.

More a songwriting showcase than a coherent collection of songs, a perfect record this isn’t, but an evident gift for songwriting and sound musicianship make Sound of the Sirens ones to watch.
5/10