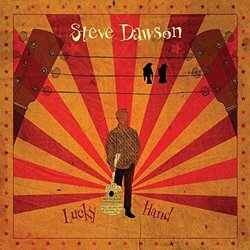 ‘Lucky Hand‘ represents the first album of instrumental music that Canadian  musician and composer, Steve Dawson, has issued since his previous outing,   ‘Rattlesnake Cage‘ appeared in 2014.  Comprised almost entirely of acoustic guitar – both 6 and 12 string – it’s the five numbers on the album where Dawson is supported by his partner Jesse Zubot’s string arrangements, particularly ‘The Circuit Rider of Pigeon Forge’ and ‘Old Hickory Breakdown,’ that are most successfully rendered.

While it’s hard to determine an underlying theme to these songs, the violins and mandolin (especially on ‘Little Harpeth’) act as a perfect counterpoint to Dawson’s masterful guitar playing. The wholly instrumental nature of such a venture means this will be a hard sell to those looking for a more immediate musical fix, but the cinematic feel which the whole ensemble manage to bring to the material make this a venture worthy of further investigation.