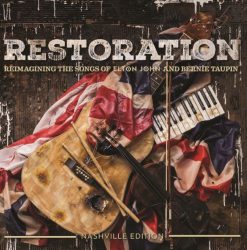 Now this is a really interesting album. To give it its full title it is ‘Restoration: Reimagining the Songs of Elton John and Bernie Taupin’ and it does exactly that. Sixteen different acts from a country music background re-interpret thirteen songs from the massive back catalogue of two of the most prolific writers in popular music. The combination of country and Elton John could’ve been really cheesy but it’s actually quite glorious and the reason for that is the songs they’ve chosen and the artists selected.

This is one of two tribute albums to the songwriting pair. ‘Revamp’ sees a different selection of songs reinterpreted by various artists from the pop, rock and R&B genres and this was curated by Elton John. ‘Restoration’ is more Bernie Taupin’s project; he’s a long time country music fan and used his own connections in the industry to assemble the artists on this record.

Many people, on seeing this album, would expect the bulk of the tracks to come from Elton John’s “country” album – ‘Tumbleweed Connection’. This has always been seen as John and Taupin’s big nod to country music. In fact, only one track, ‘My Father’s Gun’, has been drawn from that album. Anyone who knows Bernie Taupin’s work as a lyricist will know that he draws heavily on American images and inspirations for many of his songs, so it’s no great surprise that a number of them lend themselves so readily to country music versions, without straying too far from the original recordings. That may be the one disappointment of the album – that some of the reimaginings didn’t employ a little more imagination in their arrangements and take the songs further away from their original sound but that’s always one of the problems in reinterpreting well known songs; just how far can you take it before it becomes a re-write rather than a reimagining?

Taupin has assembled a great cast of country acts for this record. We get the legendary names  – artists like Willie Nelson, Dolly Parton, Emmylou Harris – but we also get some of the newer names on the scene, younger artists like Maren Morris, Kacey Musgraves and Brothers Osborne. There’s something here for everyone, from Rhonda Vincent and Dolly Parton’s spirited Bluegrass take on ‘Please’ through to the Brothers Osborne and their rocked up ‘Take Me To The Pilot’ along with the elegant country folk of Rosanne Cash & Emmylou Harris’ beautiful duet on ‘This Train Don’t Stop Here Anymore’, a truly outstanding track.

It’s interesting to see that the only track ‘Restoration’ shares with its partner record ‘Revamp’ is ‘Mona Lisas and Mad Hatters’ originally on the ‘Honky Chateau’ album and Taupin’s bittersweet reflection on loss and loneliness. On ‘Revamp’ it gets the big production number from The Killers but it’s a song that’s better suited to Maren Morris’ take on it for ‘Restoration’. Her voice has that breaking quality that brings out the real emotion of the song, which is reckoned to be among Elton John’s own short list of favourites from his back catalogue.

The only artist to make both records causes you to stop and raise the eyebrows a bit. Miley Cyrus is the artist in question and it’s quite a surprise to see her on ‘Restoration’ given that her Dad is probably more associated with country music than she is. Here she gives us a rousing bar-room version of ‘The Bitch is Back’ which seems sort of appropriate and suggests that she has quite a good sense of humour – and it is a fun track (she contributes a more predictable version of ‘Don’t Let the Sun Go Down on Me’ for the ‘Revamp‘ album). Elsewhere we have a great collaboration between Vince Gill and Don Henley on ‘Sacrifice’, their voices really working well together, probably one of the reasons why Gill is currently working with The Eagles. Little Big Town give us a harmony soaked rendition of ‘Rocket Man’ and Lee Ann Womack contributes a suitably honky tonk ‘Honky Cat’ plus there are tracks from Chris Stapleton (‘I Want Love‘), Miranda Lambert (‘My Father’s Gun‘), Kacey Musgraves (‘Roy Rogers’) and Dierks Bentley (‘Sad Songs‘). And to round everything off, Willie Nelson contributes his sparse rendition of ‘Border Song’ and makes it sound like it was specially written just for him.

Even if you’ve never been much of a fan of Elton John this album is worth your attention because it’s really highlighting the quality of Bernie Taupin’s lyrics. Country music prides itself on telling stories – three chords and the truth – and, in many ways, that’s what Taupin does. Listening to these reimaginings of their songs, stripped of the showmanship that Elton John brings to them, you hear the quality of Taupin’s words. That’s not to distract from John and what he brings to their collaboration, their partnership has produced some great songs and much of that is down to Elton John’s clever melodies – but it’s nice to see Bernie Taupin’s lyrics get their moment in the spotlight and it’s appropriate that should come from a country infused album, a genre he’s always appreciated and championed.

An eclectic mix of country artists give us their versions of Elton John/Bernie Taupin songs to great effect.