Steve Earle & The Dukes have announced the release ‘Ghosts of West Virginia’ due out on May 22nd, 2020 via New West Records – you can hear the first track from it below.  The album was produced by Steve Earle and engineered by Ray Kennedy at Jimi Hendrix’s legendary Electric Lady Studios in New York City. The 10-song set is Earle’s 20th studio album and was mixed entirely in mono. In recent years, Earle has experienced partial hearing loss in his right ear and can no longer discern the separation that stereo is designed to produce. The recording features his latest incarnation of his backing band The Dukes; Chris Masterson on guitar, Eleanor Whitmore on fiddle & vocals, Ricky Ray Jackson on pedal steel, guitar & dobro, Brad Pemberton on drums & percussion, and Jeff Hill on acoustic & electric bass.

‘Ghosts of West Virginia’ centres on the Upper Big Branch coal mine explosion that killed twenty-nine men in that state in 2010, making it one of the worst mining disasters in American history. Investigations revealed hundreds of safety violations, as well as attempts to cover them up, and the mine’s owners were forced to pay more than $200 million in criminal liabilities.

Earle started working on the album after being approached by Jessica Blank and Erik Jensen, a playwright team that would create Coal Country, a theatre piece about the Upper Big Branch disaster. They interviewed the surviving West Virginia miners, along with the families of the miners who died, and created monologues for their characters using those words. Working closely with Oskar Eustis, the Public Theater’s Artistic Director, they workshopped the songs and text for nearly four years. Earle functions as “a Greek chorus with a guitar,” in his words. He is on stage for the entire play and performs seven of the songs that lead Ghosts of West Virginia, including the powerful “It’s About Blood,” in which Earle blazons the names of all the men who died. “The actors don’t relate directly with the audience,” Earle explains. “I do. The actors don’t realize the audience is there. I do.” The songs provide personal, historical and social context for the testimony of the play’s characters. 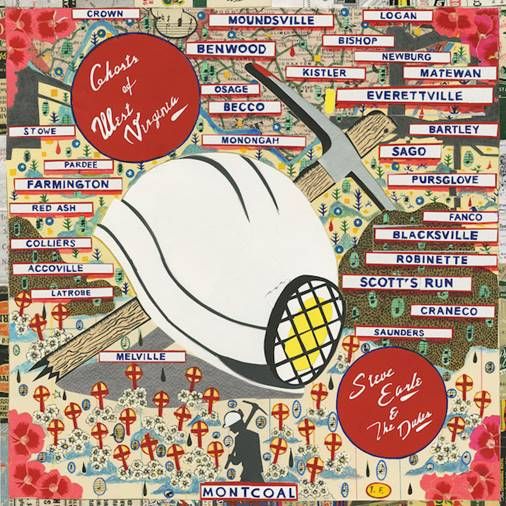 In the ten songs that make up the album, Earle explores the historical role of coal in rural communities. With Ghosts of West Virginia, Earle says that he was interested in exploring a new approach to his songwriting. “I’ve already made the preaching-to-the-choir album,” he says, specifically alluding to 2004’s ‘The Revolution Starts…Now’.

“I thought that, given the way things are now, it was maybe my responsibility to make a record that spoke to and for people who didn’t vote the way that I did,” he says. “One of the dangers that we’re in is if people like me keep thinking that everyone who voted for Trump is a racist or an asshole, then we’re fucked, because it’s simply not true. So this is one move toward something that might take a generation to change. I wanted to do something where that dialogue could begin.” He adds, “I said I wanted to speak to people that didn’t necessarily vote the way that I did, but that doesn’t mean we don’t have anything in common. We need to learn how to communicate with each other. My involvement in this project is my little contribution to that effort. And the way to do that — and to do it impeccably —is simply to honor those guys who died at Upper Big Branch.”

Steve Earle & The Dukes suffered a major loss when, not long before the band went into the studio, bassist Kelley Looney, who had played with Earle for thirty years, passed away. Beyond the death of a longstanding musical partner, Earle was faced with the prospect of finding someone who could share the telepathic musical communication so characteristic of the band. Happily, Jeff Hill, recently of the Chris Robinson Brotherhood, joined the band on bass. “Earle says, “Jeff stepped into the breach, but it was hard. It was really hard.” In addition to the 29 miners killed at Upper Big Branch, Ghosts of West Virginia is dedicated to the memory of Kelley Looney.

Steve Earle’s Ghosts of West Virginia will be available across all the usual formats alongside a limited to 500 Smoke/Coal Colored Vinyl Edition autographed by Steve Earle which is available for pre-order now via New West’s website. Here’s the first single ‘Devil Put the Coal in the Ground’.