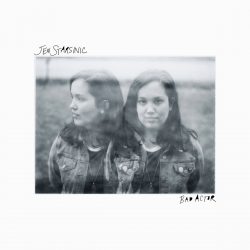 The new EP from Jen Starsinic is a significant move away from the Nashville-based singer’s folk-infused debut album, ‘The Flood and the Fire’. It has taken her several years to put together this new material and in that time her sound has shifted towards dreamy pop with a touch of indie-rock. ‘Bad Actor’ is characterised by shimmering production, strong beats and Starsinic’s distinctive, laid-back vocal delivery. The evolution in her sound reflects the experiences and changes in her personal life in recent years, evident in her open-hearted, confessional lyrics.

The six songs in this collection benefit from strong backing players, particularly Paul Niehaus on pedal steel and electric guitar. He brings his experience with Calexico, Iron & Wine and Justin Townes Earle and is especially effective on the title track, which is a rhythmic song with a lush sound. The organic guitar solo and warm pedal steel make the song one of the EP’s highlights. The opening track and first single, ‘Picture in a Frame’ is another high point, with its ear-friendly melody and driving rhythm that, along with layers of instrumentation, builds during the song.  The next track, ‘Cold’, is another tuneful, engaging piece with a sprawling, full sound.

Perhaps the most interesting track is the closer, ‘Foreign Thing’. This was originally a fairly traditional folk song on Starsinic’s 2014 debut. The decision to re-imagine and re-record the song serves to demonstrate quite how her approach and sound have moved on. The fiddle is gone. ‘Foreign Thing’ has become a swirling song with deep bass and a driving beat. The Electric guitar and rhythm build up, transforming it into something like an indie-rock anthem.

Lyrically, Starsinic’s autobiographical tales often contrast with the gentleness of the music and her dreamy vocal. There’s a drowsy resignation or a delicate bitterness when she sings: “Some people are made for leaving, I learned from an early time,” or, “Some people can make promises that they keep ‘til they’re old // Love’s a pretty good thing or so I’m told.” And it’s decidedly less delicate when she calmly delivers: “This shit used to turn out alright,” and “When I’m alone, I feel fucking lonely // When I get tired, I feel fucking dead.” The downbeat introspection, though, is well-controlled and never becomes too much in the context of the music and the narratives. Thankfully, by the last of the new songs, ‘Now That Your Baby’s Gone’, there’s a more hopeful tone and she tells herself to: “…quit humming sad songs,” as she recovers from a relationship breakup.

Starsininc produces well-crafted, melodic songs, enhanced by her distinctively drowsy voice. The development in her musical style suits her and sets her apart. If you like your Americana to deliver poppy rhythms and lush, layered production, then ‘Bad Actor’ will not disappoint.