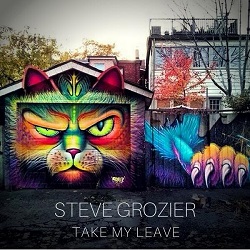 Steve Grozier has had the four songs which make up the Take My Leave EP knocking around unrecorded for more than a decade. Not stuffed, half forgotten, in a draw like some embarrassing half finished first draft of a novel. Nope these songs which document the part of his life spent living in Toronto have remained in the Scottish singer-songwriters’ set lists, it’s just that they’ve been newly polished up through being played in a band setting. The presence of a rhythm section and additional guitars has changed them enough to make Grozier keen to record them – and it’s easy to hear why.  The band add a country dusted folk rock feel to this series of snapshot scenes – the life on the road tale of Drink before Dawn purports to be about good times with good mates, but soon reveals a broken heart that can’t bear to sleep alone, for fear of thinking of old times.  Porcelain Hearts uses edgy clipped playing to portray the emotions of the girl who was left behind – the first, or at least, an early love that has been outgrown – “Lucy I didn’t mean to ever break your heart / all those childhood dreams they simply fell apart / we walked in as kids / we had porcelain hearts”.

There isn’t really a lot more for Steve Grozier to say – he’s been sad, he broke a girl’s heart, and then – what? Well title track Take my leave seems to be the mixed emotions on going back home again whilst the warm and bouncing Ringing of the bells is the slight redemption of a new girl that’s been hooked up with, the positive feelings literally rung out by the sound of church bells wafting into their hotel room. Grozier writes and sings it all in a style somewhat reminiscent of Justin Townes Earle, it sounds pretty good even if the subject is not an unusual one. At least, though, he hasn’t tried to spread this relationship breakup over an indulgent album’s worth of songs.

Steve Grozier reveals that love hurts, love scars, love wounds and mars. Did then, does now.