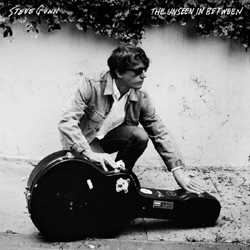 Maybe the best example of an “underground” artist coming to the fore that we’ve come across in recent years, Steve Gunn is perhaps best known as having been Kurt Vile’s guitarist. However, he has a healthy back catalogue of solo and collaborative recordings and with ‘The Unseen In Between’ gathering a great deal of media attention it’s unlikely he’ll be considered “underground” for much longer. It’s one of those albums which just seems to have been born at the appropriate moment.  A shimmering slice of psychedelic influenced folk, it talks to lovers of Tim Buckley and Michael Chapman (with whom Gunn has worked) and over its duration it simply envelops the listener in washes of reverbed guitars and cosmic layers of sound. With artists from opposite ends of the psychedelic guitar spectrum such as Israel Nash and Ryley Walker gaining momentum, it’s time for Gunn to step into the spotlight.

The album opens with the glorious refrains of ‘New Moon’, a sun dappled pastoral treat with burbling double bass, layers and layers of guitars, strings and winsome harmonica. It shimmers with a delicate beauty, Gunn’s voice floating over the music serenely. Had the rest of the album continued in this vein then it would indeed merit attention but Gunn dials it down somewhat for the remainder while still maintaining that vision of a musical Eden. ‘Luciano’ and New Familiar almost recreate the intensity of the opening song but they are somewhat more supple and nuanced, the psychedelic haze a light mist as opposed to an all enveloping sensory overdose.  ‘Vagabond’ strides purposefully like some folk rock ballad from a CBS early seventies sampler disc, ‘New Familiar’ could have appeared on the debut Fairport Convention album and the closing ‘Paranoid’, a song where piano replaces guitar as the focus, is a Beatles’ like panjandrum with backwards effects, Lennon like vocals and superb signature changes.

A couple of the songs cleave more to the Takoma/John Fahey school of thought with Gunn’s finger picking more to the fore. ‘Chance’ is another bucolic meander while ‘Lightning Field’ (inspired by an artwork in the New Mexico desert) has sinewy acoustic guitar grounding the song as sparks fly from stratospheric electric guitar solos flying in and out. Gunn is most grounded however on the stark ‘Stonehurst Cowboy’, a song written for his late father. With just his acoustic guitar and double bass he offers here a powerful song which recalls the late Bert Jansch in its delivery. Overall, a tremendous record.