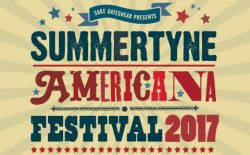 That’s summer over and  our roving reporters have been out and about at various festivals in search of the sun and fine music. A few got lost on the way back so it’s only now that we can offer another report on Summertyne which we had already looked at here. There’s more from the indoor set ups this time, maybe our man forgot to bring his umbrella.

Once again, it’s that time again. Time for Americana music fans to converge on Gateshead’s Sage venue, indoors and out during the day.  Friday was a great night as Merle Haggard’s Strangers, featuring brothers Ben and Noel Haggard, was the act I had been most looking forward to and judging by the size of the audience in Hall Two the anticipation was shared. We weren’t disappointed; the entertaining Noel kept the show lively with his humour while Ben flexed his muscles on electric guitar with lead vocals shared. The band had the veteran Norm Hamlet (49 years with the late Merle Haggard) on pedal steel plus another Stranger on bass.  The boys worked their way through a healthy portion of Merle’s songs and, although they played a generous set, another thirty minutes would have been greatly appreciated. Both offspring possess a singing voice reminiscent of their late father and while the voice of Ben carried better than Noel’s they complimented one another superbly. Born to different mothers Noel joked that he had to wait for Merle to have a sixth son, Ben, to be born for there to be another guitar player in the family other than himself.  They were a treat indeed for country fans thirsting for the traditional side of the music and not what is currently coming out of Nashville. Song wise it was like switching on a Merle Haggard jukebox only it was his offspring singing them. Highlights included classics, Today I Started Loving You Again, Noel’s terrific version of Chill Factor and Ben’s excellent interpretation of Mama Tried. It was a night to savour, and with a great likeness to Merle they gave new life to The Fugitive – The Running Kind. There was no disguising the fact of their birthright!

Prior to the Haggard siblings the audience had the great pleasure of sampling the unassuming daughter of Glen Campbell, Ashley. Playing banjo and guitar along with her brother Shannon Campbell on guitar, fiddle and Dobro, a pleasing sound wafted from the stage. Among her set there were some fine songs from her forthcoming debut album including Remembering and tasteful covers of Jolene, Gentle On My Mind (sung for her father). Her down home stage presence coupled with the quality of playing were finer than anticipated.

On the concourse stage The Stax Academy, Cyndi Cain, and The Kentucky Cow Tippers worked hard, some making multiple appearances to entertain the crowd. So much was happening and there was the buzz of folk leaving Hall One having seen The Shires. Though not my scene, it appears they performed with style.

Saturday was even more hectic. Early birds had the opportunity to sail down the River Tyne and listen to more from Ashley Campbell and the band Massy Ferguson.  If yesterday’s surprise find was Ashley Campbell then today it was the larger than life Pistol Annies founder member, singer-songwriter Angaleena Presley. Kentucky-born Presley was like a breath of fresh air. She walked on stage to reveal, warts and all, as her songs spoke of many truths. Her concerns about female equality in the music business, backwoods roots and how those less fortunate all need a helping hand every once in a while all figured strongly. Her songs ranged from big favourites Knocked Up to Wrangled and a song she wrote with Guy Clark, Cheer Up Little Darling. It was the last song he completed before his death early last year. Whether she was standing up for a cause (and there were a few) or focussing on her own failings Presley was never less than entertaining. From her days with The Pistol Annies (Miranda Lambert, Ashley Monroe and herself) she delighted the audience with Takin’ Pills. Presley is not ashamed of her rural roots, her gender or a failed marriage; the fact she is now happily married takes some of the pressure off the subject. Of the former she spoke of how she considered setting her house on fire as the bank threatened repossession; they eventually did take away her Nashville home. From rural country life to high school days and her struggle to gain acceptance in what she sees as being a man’s world playing country music in Nashville to generally sticking up for women,  straight shooter Presley set a match to the torch. Let’s hope she can keep the flame burning. I for one believe she is set for bigger and better things and she isn’t about to concede an inch to Nashville’s commercial machine. I dare you to say otherwise within earshot of the feisty, opinionated songwriter.

Support act Danni Nicholls showed she is an accomplished act as she warmed the stage for Presley, impressing her audience with material from her album Mockingbird Lane.

Nashville country singer-songwriter Jim Lauderdale stepped up on stage like he was back home and set to play the Grand Ole Opry. Dressed in his country attire he set it up perfectly for the on the rise, California-born and raised, Sam Outlaw and his band. Lauderdale’s wealth of product and experience place him on a level few will ever dream of achieving. His stories and varied collection of songs crossed an inner boundary or two as bluegrass, soul country and rock’n’roll were highlighted. His pure country tune King Of Broken Hearts figured alongside songs from his latest album London Southern along with Lost In The Lonesome Pines (a song he originally recorded with the late Dr. Ralph Stanley). Entertaining throughout, Lauderdale kept one gem up sleeve for his finale. It was a co-write with a man whom he shares a radio show and has worked with for many a year, the iconic Buddy Miller and the killer song Hole In My Head.

A hard act to follow but Sam Outlaw did, up to a point. Accompanied by a seven-piece band he might have over cooked the goose a little but afterwards there were still lots of smiling faces. Despite my reservations, Outlaw with the aid of harmony vocalist Molly Jenson eased his way through material from his critically acclaimed albums Angeleno and Tenderheart. With highlights including Trouble, All My Life (loved the pedal steel guitar) and the occasion when he dispensed with the band as he and Jenson served up a terrific version of Love Her For A While he set a high benchmark.  Otherwise, the music, though good, was a little too frenetic and his diction lacked sharpness as he sacrificed more than was gained on a night where he could easily have mopped up. Why he thought he needed a band of this size when he already had all that was needed puzzled me. Since he had a set of well-written songs along with his fine singing voice (aided by Jenson) a basic set of players was all that was required.

Mention must be found for one of two acts I caught briefly on the Jumpin’ Hot Stage. The hard-working Amythyst Kiah, the Vera Van Heeringen Trio and an impressive Earl Thomas & Band, all of whom are the kind of people you need at a festival like this. Reliable and proficient the latter showed real quality when performing a mighty fine version of Tennessee Whiskey (which was selling well at the bars on the night).

On Sunday, the highlight came outside when Brennan Leigh and her husband, Texan Noel McKay, performed with fellow band members in the bluegrass ensemble High Plains Jamboree. Sadly, the rain gods hadn’t read the script as the heavens opened, and though it eased after their tremendous set it returned even worse for Louisiana’s top cajun group, The Savoy Family Band. Far from dampening their spirits it inspired Marc, Ann, Joel and Wilson to put on a real show for the fans that remained, and who actually danced in the rain. It is times like these the real fans are found, and players too! The music could not have been better, the band crowding around one microphone playing the dickens out of the tunes while the close harmonies were jaw dropping.

It was also the day for blues music in Hall Two as Jo Harman and then the mighty Lisa Mills won the admiration of the audience. Powerhouse Mills was in great form. Her gritty vocals brought to life images of dirt country back roads and Mississippi rural life (and otherwise) as she walked them in her scuffed, down at heel cowboy boots. Mills is the real deal. Of this there has to be no doubt, plus the story of how she found her mother’s songbook it was most compelling listening.  England’s own Jo Harman shared the bill and rightly so. Her performance was less abrasive and with her accomplished playing of her Steinway she eased, at times effortlessly, though her set. Among the numerous highlights, there was Sweet Man Moses and her influences ranged from the blues to the likes of singer-songwriter Joni Mitchell.

Moving freely during the day between the outdoor stage, concourse stage there was the ever interesting SummerTyne Lounge where you might drop in on a vintage film showing old-time music of Appalachia or one on the music involved in the 1960s Civil Rights struggle along with live music by way of a mini-set from an act playing the festival. Outdoors I continued to catch segments of sets and there were plenty that impressed ranging from Robert Vincent (& Band) to Kentucky Cowtippers by way of the wonderful Errol Linton Blues Band, and the unique Bradley Creswick Western Swing Orchestra.   Cath and Phil Tyler and Tim Erickson had to compete with Chuck Prophet on one stage, and Beth Nielsen Chapman in the main hall. Prophet, described by one enthusiastic fan as the best rock’n’roll live act currently performing, pulled out all the stops! I have to admit he did light up the stage when Jim Lauderdale, Ashley Campbell and Amythyst Kiah performed a Songwriter’s Circle gig. He simply blew the audience away with his tale about two brothers in San Francisco! My thoughts then were it doesn’t get any better than this!

As for the festival in general, it could not have been more diverse with most areas of Americana covered even though I would’ve liked to see a really big act light the touch paper. Maybe 2018 will see someone of that calibre grace this wonderful festival. That’s not to say William Bell and The Stax Academy Revue weren’t a big act, they were, but weren’t of the kind to stir the hearts of the majority of Americana devotees.