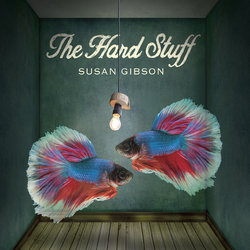 If the name Susan Gibson rings a bell it should come as no great surprise – her big claim to fame is being the writer of ‘Wide Open Spaces’, a sizeable hit for The Dixie Chicks and named as the CMA Awards Single of the Year in 1999. What is a surprise, particularly on the evidence of this, her first full-length solo album in some eight years, is that Susan Gibson’s name isn’t ringing a lot more bells in a lot more places! Hopefully this new album, ‘The Hard Stuff’, should go some way to correcting this situation.

Susan Gibson is, quite simply, a songwriter at the top of her game. What we get here are ten new songs, nine written by Gibson and one written in collaboration with Jana Pochop and Michael Schwartz and there’s not a weak song among them. It seems that this album has come about after a period of reflection following the deaths of both Gibson’s parents over a relatively short period. While this must have been a traumatic time for her, she seems to have emerged from it re-energised and with a more positive take on life in general. Much of the music here is upbeat and, even when the subject is a difficult one, you can still sense a positivity in Gibson’s words and the way she puts them across. As she observes in title track ‘The Hard Stuff’, “Nothing lifts a heavy heart like some elbow grease and a funny bone”.

It turns out that Gibson has a real way with a song lyric and a nice turn of phrase that helps a song stick in your mind. Album opener, ‘Imaginary Lines’ is a great song about borders, both personal and geographical and the imagined lines we use to define these borders. Arising from a road trip, travelling to a gig with Jana Pochop, this is the one co-write on the album but you sense that the lyrics are very much Gibson’s – “Grabbed my own set of keys and unfolded a map / left the rat race, left the cheese in the trap”. It’s a strong beginning to the album, full of jangling guitars and Gibson’s own soaring vocals.

It’s the variety of the songs, and their subjects, that is particularly impressive. We have a real mix of tempos and styles along with a range of subjects, going from the memories raised by a treasured photograph to conversations with friends to childhood reminiscence – Susan Gibson writes real songs about real people and real situations and that’s what makes this such a listenable album. She’s been helped by some terrific production from Andre Moran who has helped to colour these songs with unpredictable arrangements and instrumentation, giving the songs a strong identity beyond Gibson’s voice and guitar accompaniment. From the funky guitar riffs and jazz horns of the title track through to the simple banjo and fiddle accompaniment of album closer ‘8 x 10’ there is so much going on in this album that you can listen to it over and over again without any of the tracks sounding like they could become jaded.

It’s hard to imagine that there won’t be plenty of established acts sniffing around this album, hoping to emulate The Dixie Chicks’ success with a Susan Gibson song – but this artist deserves to find her own success as both a writer and performer; she has a great voice which is well shown off by these songs and the album production; anyone who likes strong female singer/songwriters along the lines of Mary Chapin Carpenter and Gretchen Peters will find this album very much to their taste. It may have taken Susan Gibson some hard times to get to “The Hard Stuff” but the journey looks to be one that has paid off.

High quality songs from an artist finding her own voice