That’s it for us this week dear reader. We leave you with another track from the made in heaven combination of Bill Callahan and Bonnie “Prince” Billy who have teamed up for another collaborative cover. Along with guitarist Bill MacKay, this time they’ve turned their talents to Steely Dan’s 1977 classic ‘Deacon Blues’ (they’re not covering the band Deacon Blue in case you speed-read the headline), a song Walter Becker called “a broken dream of a broken man living a broken life”. The video is directed by Michael Tully, and features a woman finding some money on the ground and necking Gatorade, before watching projections of Callahan and Billy on a house. All par for the course. Have a good one.

Bill Callahan, Bonnie “Prince” Billy, and Iranian-American experimental musician and labelmates AZITA have released a lovely cover of Yusuf / Cat Stevens’ track ‘Blackness of the Night’, originally taken from his sophomore 1967 album ‘New Masters’. Cat Stevens wrote that “‘Blackness of the Night’ was one of my first ‘protest’ songs for the ’60s… Growing up in London after the War, the memories were strong and bombed ruins still riddled the City. It also reflected the feeling of emptiness wandering the streets at night alone, pondering how to survive in a dark unknown future.”

Like buses, you wait ages for a Bill Callahan track to appear on AUK, then two come at once. Bill Callahan has announced a new album called ‘Gold Record’ due September 4th via Drag City. The 10-song album features a new version of ‘Let’s Move to the Country’ from Smog’s 1999 album ‘Knock Knock’, along with a track named after Ry Cooder. He’s releasing a new track from the record every week from this week and the first is the one we leave you with for the weekend dear reader called ‘Pigeons’ which, after introducing himself as Johnny Cash, begins with the amazing line: “Well, the pigeons ate the wedding rice/And exploded somewhere over San Antonio.” You won’t hear this on Smooth Country Radio. Have a good one.

This week we were somewhat concerned that local rag – The People’s Republic of Liverpudlia’s Armageddon Times and Advertiser – ran a piece which was clearly in contravention of The People’s Republic’s Declaration on Inhuman Rights. Local law enforcement giant Bobby Bob was interviewed about how he had taken his local authority issued bike on a cycling holiday around a neighbouring republic and whilst there had afforded himself the opportunity to observe the local law enforcement’s methods of subduing the nasty, unwashed miscreants that litter their society. END_OF_DOCUMENT_TOKEN_TO_BE_REPLACED 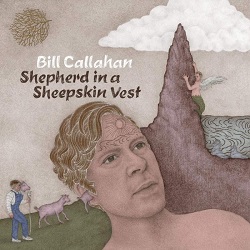 Bill Callahan makes everything sound momentous – that dark growl of a baritone, reminiscent of Kurt Wagner, adds weight of course.  And then there’s the quietly, and intellectually, confessional side of his lyrics which means that the lyrics tend to drop like concrete blocks, cemented permanently in place before the next thought is paraded slyly before the listener. And although it has been six years from his last release nothing has changed fundamentally in the music although ‘Shepherd in a Sheepskin Vest‘ is if anything even further stripped back, predominantly guitar and vocal and little else other than little electronic effects, found sounds and the plinking of thumb piano. END_OF_DOCUMENT_TOKEN_TO_BE_REPLACED

Rejoice! Bill Callahan’s late-phase hot streak continues with the announcement of his first record since 2013, ‘Shepherd in a Sheepskin Vest.’  After its predecessor ‘Dream River’, Callahan’s life went through some changes including marriage and children, but described the situation where afterwards it was  harder for him to find the place where the songs came, to make him and these new experiences over again into something to sing. END_OF_DOCUMENT_TOKEN_TO_BE_REPLACED