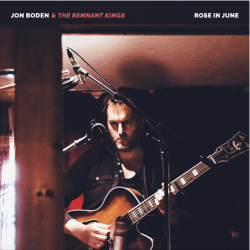 is best known as the leader of English folk band Bellowhead. This new album, his fourth solo work, is more diverse in sound and feel than his former group, despite relying at least partly on traditional songs. ‘Rose in June’, which Boden acknowledges hearing through the work of Lou Killen, opens the album and has an air of Runrig about it. END_OF_DOCUMENT_TOKEN_TO_BE_REPLACED

Jon Boden’s fourth solo album has been announced – it’s called ‘Rose in June‘ and will be out on Hudson Records on the 1st of November.  It isn’t the direct follow up to 2017’s ‘Afterglow‘ which was the second of a trilogy of albums drawing inspiration from a post-apocalypse vision of a world without fossil fuels.  Instead ‘Rose in June‘ sees Jon Boden reunited with The Remnant Kings for a new set of recordings drawn from the live repertoire. END_OF_DOCUMENT_TOKEN_TO_BE_REPLACED

As both a “him” and a “them”. Ex-Bellowhead frontman Jon Boden will hit the road firstly as a solo act in mid-April, starting at Brecon’s Theatr Brycheiniog before picking up The Remnant Kings later in the month at Saltaire’s Victoria Hall. Jon recently shared this short clip below of him performing Fires Of Midnight as part of the Bright Young Folk December Sessions. The 12-time BBC Folk Award Winner dropped his second solo release earlier this year, following on from his debut ‘Songs From The Floodplain’ – ‘Afterglow’ follows the tale of two lovers, set against the blazing backdrop of a street carnival.  Here are those dates. END_OF_DOCUMENT_TOKEN_TO_BE_REPLACED

Those who still pine for the folk excesses of Bellowhead can take some comfort from Jon Boden’s latest outfit. After a solo tour Jon Boden has got the old band back together and is taking new album Afterglow out on tour with The Remnant Kings, backed up by the string trio that is the Remnant Strings. This makes the stage at the Scala impressively full with eleven musicians, and since most of them are also multi-instrumentalists an almost excessive number of instrument stands and microphone setups. END_OF_DOCUMENT_TOKEN_TO_BE_REPLACED