Molly Tuttle’s new covers album, ‘…but I’d rather be with you’ has just been released and this FKA twigs song is the latest single.  Simply, this is a beautiful vocal performance: delicate, pure and moving.  For this album, Tuttle has selected excellent songs that have brought her joy or helped her through difficult times.  She expertly conveys their meaning to us on these carefully-worked new versions. END_OF_DOCUMENT_TOKEN_TO_BE_REPLACED 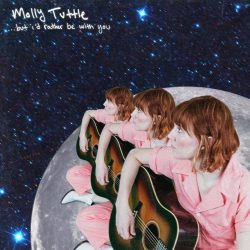 Molly Tuttle is a major talent. Faced with a Tennessee tornado, then a pandemic, she did what any worried musician might do – she recorded a covers album. She even taught herself digital recording techniques in order to record the album at home in Nashville; subsequently pinging the files to California for tweaking by producer Tony Berg and additional musical flavourings from a handful of ‘names’. END_OF_DOCUMENT_TOKEN_TO_BE_REPLACED

Guitarist, vocalist, singer-songwriter and banjo player Molly Tuttle is a leading light of the new generation of bluegrass artists, which also includes Sierra Hull and Billy Strings. She is well versed in bluegrass history and came out of the Californian bluegrass tradition and is now based in Nashville. In 2017, she became the first woman to win the International Bluegrass Music Association’s Guitar Player of the Year Award. END_OF_DOCUMENT_TOKEN_TO_BE_REPLACED

Molly Tuttle’s latest single is a cover of Grateful Dead’s ‘Standing on the Moon’, featuring backing vocals from Taylor Goldsmith of Dawes.  Their voices combine beautifully on this dreamy song, which is accompanied by a suitably hypnotic, cosmic video.  It’s taken from the forthcoming covers album, ‘…but i’d rather be with you’, due out on 28th August.  END_OF_DOCUMENT_TOKEN_TO_BE_REPLACED

Compass Records have announced details of a new album from Nashville based songwriter-guitarist Molly Tuttle, ‘…But I’d Rather Be with You’ which lands in the UK on August 28th. The album is a collection of 10 covers recorded during quarantine which includes songs by Grateful Dead, Cat Stevens and (wait for it..) Harry Styles. The opener is her own take on The National’s epic ‘Fake Empire’, the companion video for which “fiercely challenges the song’s fear of indifference and portrays a society that can no longer afford to be apathetic to the realities of our time.” You can watch it below. END_OF_DOCUMENT_TOKEN_TO_BE_REPLACED

The Grateful Dead have many claims to fame, from being at the heart of the development of psychedelic rock in San Francisco and paving the way for the Summer Of Love in 1967, to being the giant touring machine of the ‘80s and ‘90s setting attendance records at major stadia across America. They also just happened to have one of the best songwriting partnerships of modern times in guitarist Jerry Garcia and lyricist Robert Hunter. Those who have more than a passing interest also know that with their albums ‘Workingman’s Dead’ and ‘American Beauty’ they contributed to the development of country-rock. END_OF_DOCUMENT_TOKEN_TO_BE_REPLACED

“I think that live music is something that the internet can never kill”  – Jim James (My Morning Jacket).  In an age when we can access our favourite music in so many ways and so many forms, for me the best way remains – live. I’m not talking massive stadium or arena gigs, but small and medium-sized venues with character and intimacy. With only a handful of exceptions, these are the places where most Americana artists will ply their trade in the UK. Luckily for me, there are a number of such venues in Manchester providing the opportunity to see top acts for relatively small amounts of money. END_OF_DOCUMENT_TOKEN_TO_BE_REPLACED

Molly Tuttle has been creating quite a lot of noise recently and on tonight’s evidence she’s no empty vessel. Twenty-six year old Tuttle grew up in San Francisco and started to play the guitar when she was eight years old. Four years ago, she moved to Nashville, releasing a seven track mini- album ‘Rise’ in 2017. Her debut full album ‘When You’re Ready’ was released earlier this month to huge critical acclaim. No surprise really then to find a packed crowd in Manchester wanting to check out the live experience and they were not disappointed as they were treated to an enthralling evening of Tuttle’s songs along with some carefully selected covers and a display of folk guitar playing that stands up alongside the very best. END_OF_DOCUMENT_TOKEN_TO_BE_REPLACED

Americana Music Association’s instrumentalist of 2018, Molly Tuttle, is about to embark on a UK tour later this month, but you’ll need to act fast seeing as 6 of the dates are already sold out. The supremely talented musician and singer-songwriter is about to launch her debut album, ‘When You’re Ready,’ backed up by latest single, ‘Million Miles.’ END_OF_DOCUMENT_TOKEN_TO_BE_REPLACED

‘Million Miles’ is the new single from award-winning songwriter-guitarist Molly Tuttle which is taken from her forthcoming debut album ‘When You’re Ready’ which lands on Friday, April 5th via Nashville’s Compass Records. The single features Jason Isbell on backing vocals and Sierra Hull on mandolin. END_OF_DOCUMENT_TOKEN_TO_BE_REPLACED