Sometimes you just know when you have made the right choice and so it was that when The Deslondes struck up it was clear that the other attractions at tonight’s Celtic Connections would pale in comparison. From the very start this five piece New Orleans band transformed Oran Mor into a dusty American Roadhouse, the standing audience swaying in time to the beer stained music throughout the show. END_OF_DOCUMENT_TOKEN_TO_BE_REPLACED

After a rather successful European tour last month, New Orleans-based act The Deslondes have announced a UK tour for January 2018, including a slot at Celtic Connections in Scotland. This follows the release of their new album Hurry Home (out now on New West), which was described by Uncut in their 8/10 Americana Album Of The Month review: “Hurry Home finds The Deslondes exploring the connections between surf, rock ’n’ roll, honky-tonk and Southern soul to fashion a wonderfully interchangeable whole.” And you can’t say better than that (although every time someone writes the word “whole” now it calls to mind the name of the new South Park videogame) END_OF_DOCUMENT_TOKEN_TO_BE_REPLACED 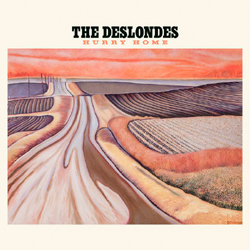 Five divergent musicians who eventually found each other in New Orleans, The Deslondes follow up their impressive 2014 debut album with the equally fine Hurry Home. Less country inclined than its predecessor the album finds the band roaming through a variety of styles – swampy southern roots, 50’s rockabilly, and classic rhythm’n’blues which, with several members of the band singing lead on various songs gives the album a truly dynamic feel. Comparisons to The Band and The Felice Brothers (which surfaced in reviews of the first album) will persist and that’s no bad thing and although The Deslondes are not as rough and ready as The Felice crew they’re handy reference points. END_OF_DOCUMENT_TOKEN_TO_BE_REPLACED