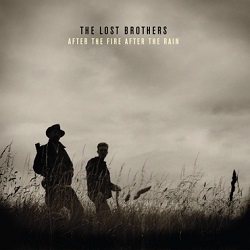 The Lost Brothers recorded this, their sixth album, in New York with production duties shared between Daniell Schlett and Tony Garnier. As Dylan’s longest serving bass player Tony Garnier naturally also brought some upright bass to the sessions – and naturally, ‘cos it’s that kind of story, the bass used once belonged to Charles Mingus. So there were some legendary elements hanging around the duo of Oisin Leech and Mark McCausland – and there’s that sense of an epic tale being unfolded to ‘After the Fire After the Rain‘. END_OF_DOCUMENT_TOKEN_TO_BE_REPLACED

It appears not to be lost on The Lost Brothers themselves that after twelve or so years together and five prior albums, bigger things and greater attention looms imminently on their horizon. “Normally when we play London,” declares singer and chief chat guy Oisin, “we know everyone by name.” Whilst tonight’s intimate and attentive crowd of a few hundred or so may not exactly be the O2 arena, it’s a notable step up in size and comfortably seated grandeur. Additionally the show is the first of many on the forthcoming tour poster to be slapped with a ‘sold out’ sticker. END_OF_DOCUMENT_TOKEN_TO_BE_REPLACED

The Lost Brothers have released a new single from forthcoming album ‘After the Fire After the Rain’, which is expected in February.  ‘After the Fire’ was written after spending a night sitting around a campfire with old friends.  However, the song took on greater significance when, on the day it was tracked, they learned that The Plaza Dancehall in Donegal, where they had performed often, had been destroyed by a fire. END_OF_DOCUMENT_TOKEN_TO_BE_REPLACED

Giant Sand main man and indie legend Howe Gelb has been announced as a special guest on the upcoming Lost Brothers Irish Theatre Tour this December. Based in Tuscon Arizona since 1972 Howe has collaborated with artists such as M Ward, PJ Harvey and John Parish, and his band Giant Sand spawned and inspired bands such as Calexico who are part of Howe’s extended musical family.  END_OF_DOCUMENT_TOKEN_TO_BE_REPLACED 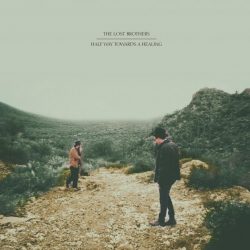 It has just been announced that on Friday June 8th the Lost Brothers, Oisin Leech and Mark McCausland, will have very special guests at their homecoming gig at Dublin’s historic Liberty Hall Theatre on Eden Quay. For one night only the Irish duo will be joined onstage by the Tuscon Arizona band with whom they recorded their recent critically acclaimed album. END_OF_DOCUMENT_TOKEN_TO_BE_REPLACED