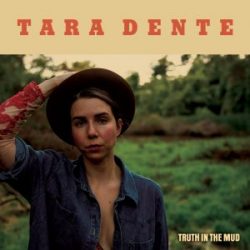 It’s a fact that there is a wealth of great female vocalists out there – however Tara Dente does raise the bar and there are a couple of tracks on this album that could lead you to believe that her vocal cords are made of some exotic synthesis of Turkish Delight and a Caramac chocolate bar. Vocals as effortlessly rich as this haven’t been heard since the prime of KD Lang. Dente comes from the Asbury Park area which surprises, though it is more difficult to be clear where her home turf might be – but it isn’t there. It also needed checking a couple of times to be sure that she wasn’t English – or indeed Joni Mitchell minus that irritating vocal trill.

‘Truth in the Mud‘, is Dente’s third album recorded at Mountain Fever Studios in Virginia with her core band, sometime Blind Pilots, of Chris Dubrow on bass, Chris Colon on guitar and Santo Rizzolo on drums – there’s pedal steel, piano and violin also featured. The music supports the singer in an unfussy way though still allowing variety and the occasional ear-catching interlude. The guitar intro to, ‘Let a Good One Go‘, the piano in, ‘Enough‘, the percussion and the abrupt ending on, ‘Truth in the Mud‘; fade-outs can just seem so lazy sometimes.

The inside of the CD cover has a note from the artist – about mud. “Mud is elemental and everyone looks the same with it on their skin. It holds years of information, invaluable species and quietly and humbly exists on the bottom, as a foundation for life”.

It is those thoughts that inform the best track on the album, ‘Truth in the Mud’. This is a tale of the early carefree years of the ‘Little girl in her pristine world‘. Capturing the memories of childhood can be the most subjective of activities, often misfiring, but the lyrics seem to conjure up just the right pictures.

‘Got coins in my hand for the gas station / My little legs take me there / All that I know are the shapes of the clouds / And the smell of salt in the air‘. It’s perhaps those, ‘Little legs‘, that provide the really telling image?

Dente stares out of the CD cover with a pretty unmitigated gaze and it’s that attitude that anchors most of these songs. This is not to say that she does not have her doubts or issues – thus she will, ‘Let a Good One Go‘, and was not prepared to, ‘Let him win‘. ‘What a Mess‘, recounts multiple difficulties but assures us that she gives her best. Balancing this is the thought in, ‘Enough‘, that you are enough and good enough at that.

There’s a parallel and clear blend of optimism here. ‘Ain’t no Time‘, talks about, ‘Tepid souls‘, another nice image, ‘Half-assed goals‘, and the need to follow, ‘The map I drew‘. Laudable doubts and admirable goals are all well and good – the bonus is that Dente writes about them with a degree of freshness whilst performing her work with conviction and skill – the sentiments, the art and the performance come together to make a great package.

The final song is a tribute to a lost friend – and on that basis hard to say too much about – it’s clearly heartfelt – a thought backed up by further comments on Dente’s Facebook page. It contains perhaps the best and least effective of her imagery describing her lost friend, Dave Hayes, as both, ‘Standing tall like a Redwood tree‘ whilst, more effectively, ‘If you were part of a house you’d be the open door‘.

‘Open your blinds to the sunshine / And get your fill in the meantime / Cause you never know / When it will go away‘.

Whilst this collection is recommended the one caveat would be that it’s short on content. Quality beats quantity every time but a little under 29 minutes is not generous! Dente is a relative fledgeling of an artist and her approach would seem to be, have a gameplan and no fear of mistakes – seize the moment because ultimately there aren’t that many of them. She has a great voice and a way with words and has made an album with a title track as good as anything heard in many a moon.

A fine singer with words to match