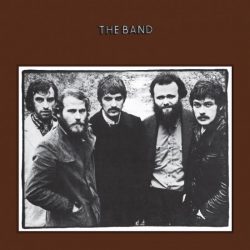 There are a number of albums that can claim to have kicked off Americana, Flying Burrito Brothers, Dylan, or CSN, but the one that really embodied the American spirit and turned it into a new sort of music was The Band’s self-titled second album. The context for this record was 1969 and the key albums were ‘In-A-Gadda-Da-Vida’ by Iron Butterfly, ‘In the Court of the Crimson King’ and ‘Led Zeppelin II‘. Into this came an album with a cover picture that looks like Matthew Brady’s Civil War portraits, and an organic acoustic sound that contrasted sharply with the Mellotrons and fuzz guitars that dominated the charts.

The album could have ended up being called ‘America’, according to Robbie Robertson and Levon Helm. Another option was ‘Harvest’. Whether or not it was meant to be a concept album is something that the members have disagreed about for 50 years. The five key songs on the album do have a unity of theme. ‘Across the Great Divide’ a story of a man who wants only somewhere to call home and a gun-toting spouse leads the album into ‘Rag Mama Rag’ a country dance number driven by John Simon’s tuba, and a lyric full of railroad images. In ‘The Night They Drove Old Dixie Down’ Virgil Caine serves on the Danville supply train that fed the Confederate capital Richmond during the Civil War. ‘Up on Cripple Creek’ shifts the travel motif to the view of a trucker and the problems of life on the road. As well as the most contemporary lyrics the song features the most modern instrument, Garth Hudson’s Clavinet played through a wah-wah pedal. The last of the key songs is ‘King Harvest (Has Surely Come)’. Critic Greil Marcus describes it as “The Band’s song of blasted country hopes”, telling of a poverty-stricken farmer who joins the Communist Trade Union Unity League in the 1930s. So, in five songs they have covered a hundred years of history and painted pictures of the archetypal American working heroes, the Trucker, the Railman and the Farmer. With ‘The Unfaithful Servant’ covering events that would be at home in a Tennessee Williams play an urban blues in ‘Look Out Cleveland’ and a couple of Country/Gospel ballads ‘The Band’ covers a blend of most of the homegrown American music styles.

The 2000 reissue added some alternate takes that by and large only highlight just how good the original album material was. This is particularly true of ‘King Harvest (Has Surely Come)’ where the alternating upbeat verses and world-weary choruses are replaced by a mid-tempo soul structure dominated by Garth Hudson’s Lowrey Organ that blunts the impact of the words completely.

‘The Band’ was placed fourth in Robert Christgau’s 1969 Jazz & Pop Ballot, and reached number 25 in the Billboard chart, a respectable enough performance for an album that flew so forcefully in the face of fashion. ‘The Gilded Palace of Sin’ incidentally was second in Christgau’s poll. The irony that the quintessential American album was made by a group of mostly Canadian musicians is often lost, but that doesn’t stop 1969 being year zero for Americana, and this record one of its sacred texts.