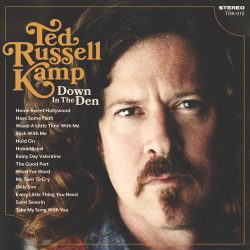 Ted Russell Kamp has released 12 albums over the last fifteen years, while holding down a career as session bass player to country and americana stars of all sorts, most recently Tanya Tucker. Opening song ‘Home Sweet Hollywood’ has a laid-back groove that contrasts with the menacing minor key Dobro and electric slide of ‘Have Some Faith’ which follows it. Whether this was the best place in the album running order for an atmospheric piece like this is up for question. It’s a good song but loses impact here.

The album is quite the mix of styles. Kamp says of it: “Originally this was going to be a real Memphis Southern soul record… and I even considered naming the record “Ted in Memphis”. Then I realized I wanted it to be a more eclectic record so I could include some more of the sensitive singer-songwriter moments.  The sensitive moments, ‘Hold On’ and ‘Saint Severin’ for instance are more country ballad than soul. ‘Waste a Little Time With Me’ and ‘Hobo Nickel’ are more Dixieland than anything else. Best song on the album is ‘Word for Word’ and this does have a touch of Memphis soul about it, along with a Lowell George style guitar solo from John Schreffler. The one song that lets the album down is ‘Rainy Day Valentine’ which is just Kamp singing accompanied by his bass guitar. Chopping the five minutes of this down, or preferably out completely would only have improved the record. The variation in styles, ‘Rainy Day Valentine’ notwithstanding, doesn’t compromise the flow of the album, Kamp’s voice and his band are strong enough to carry the material. Albums as long as 14 songs often fade out towards the end but the funky ‘Every Little Thing You Need’ and closer ‘Take My Song With You’, a duet with Kirsten Proffit, are two of the strongest songs here.

You wouldn’t expect as experienced a hand as Kamp to turn in anything less than a good record, but he takes this mix of styles and blending them into something coherent and worth repeated play. Kamp rightly says of ‘Down in the Den’: “I think this is a soulful and beautiful record with some really well-written songs that I’m very proud of.”