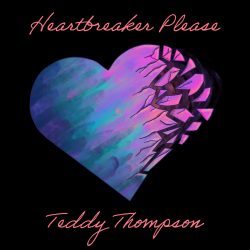 It’s been nine long years since Teddy Thompson last put out a solo album (in 2016 he did release a collaboration album with fellow singer-songwriter Kelly Jones – not to be confused with the Stereophonics frontman – the amiably delightful ‘Little Windows’), but with ‘Heartbreaker Please’ he’s finally back; and he’s on top form.

While his last album ‘Bella’ drifted a little out of the Americana realm and into the pop one, this album sees his return firmly to his inspirational roots of old school country. This album was written in the wake of a breakup, so it’s filled with the kind of songs Thompson excels at: tales of heartbreak. ‘Why Wait’ opens the album, demonstrating he hasn’t lost his touch with as classic of a Thompson line as you’re likely to get: “Here’s the thing, you don’t love me anymore.”

On ‘At A Light’ Thompson sounds like a classic country crooner, insisting that his ex will miss him when she least expects it (“On a jet or a movie set you’re gonna find / That I’m with you / All it takes is a memory flake to remind / And it hits you”). The first single from the album, also entitled ‘Heartbreaker Please’, has a ’50s rockabilly vibe running through a slick country-tinged melody with lyrics about – you guessed it – heartbreak. “Here’s the piece of my heart / That you left at the park / Only bit that remains / You can break it again,” he sings in anguish.

‘Brand New’ is musically slow and sombre, but lyrically offers some light: Thompson is happy in a new relationship and trying his best to shed his naturally maudlin tendencies (“I got a brand new bag / It’s being happy not sad / And I don’t really care / I just wanna have fun”). ‘What Now’ grapples with the practicalities of New York living costs (“I love living on my own / But I can’t afford the outgoings / Do I love you, do I need you”), but the true story here is how – despite his best efforts – Thompson only truly feels something for his other half when they’re apart and wants forced commitment to escape sabotaging the relationship (“And I know it’s the wrong way ‘round / But I need you to tie me down / Or it only happens now / When we’re miles away”).

‘No Idea’ is a kind of spiritual successor to his 2006 track ‘I Should Get Up’, in that we get to check in on Thompson’s mental health struggles (“I got no idea what I’m doing / I got no idea who I am / And the therapy is helping / But I still feel mostly sad”). ‘Record Player’ is a jaunty tune, its lyrics immediately relatable to anyone with a passion for music outside of the mainstream: “Where are the songs that I love / Where is the music that I care for / Is it only in my head / Or on my record player”. (An additional shout out goes to some of 2020s wittiest lyrics yet: “So I go for a walk now / I have to clear my ears / Even the birds are singing / The biggest shh-hit of the year”.)

‘Take Me Away’ has a dreamy nostalgic quality, sweeping swings accompanying sparse lyrics about wanting to be transported by love (in some ways it’s the more romantic sequel to 2011’s ‘The Next One’). ‘It’s Not Easy’ is all jaunty horns and foot tapping melodies, juxtaposed with struggling to connect (“Why can’t you believe that I love you so / You don’t see it, you don’t see it”). ‘Move At Speed’ eases us off into the night gently, reminding us that happiness is hard to find if you’re always looking past the present, “Leave the pieces on the floor / You will never have control / Only leaves you wanting more / You are running from yourself”.

Heartbreak is a nasty thing to suffer, but Thompson delivers it so fabulously that never has the phrase “hurts so good” felt so apt. While we certainly wish him the utmost happiness in his personal life, let’s just hope he at least remembers the sorrow of times past for any future recordings.