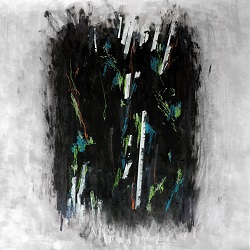 I found myself thinking of Ursula Le Guinn’s Earthsea, where young magician Ged unwittingly unleashes a dark shadow which pursues him relentlessly – until he finally faces up to it and discovers it is a part of his own being. The more prosaic interpretation of The Shadow and the Caster would be the literal one – of the shadows we all cast when we stand out in the light. So why the musings on otherworldly fantasy tales ? Well, the track listing could have something to do with that – with titles such as Death Forgets Me and In the days of the Comet (that’s a HG Wells reference right there) and Borges of course is an allusion to Jorge Louis Borges, another creator of fantastical worlds. And Yggadrasil – here we’re climbing in the tree of life, the world tree of Norse myth. So, maybe that first thought wasn’t so strange after all – Thad Kopec it would seem is one who shares in the wonder of myths and fantastic tales.

Thad Kopec takes these themes and weaves a series of complex pieces of music out of them, with stuttering percussion and orchestral flourishes accompanying his questioning and obscure lyrics. It’s baroque pop in the mould of Mercury Rev, but more intensely acoustic. Second Best dwells obliquely on love, on the romantic search “running outrageously into the dark / searching for all of you finding just part” that can dissolve oh so easily “I was afraid that you’d see me too / and I’d no longer love you”. Borges evokes Argentina through Spanish guitar, and drifts dreamily through a cityscape haunted by the writer’s literary ghost, with magical flitting shapes formed from half-thoughts appearing in the peripheral vision. Yggdrasil is a beautiful combination of finger-picked guitar, harp, and ethereal backing vocals to Kopec’s own gently spilling words.

Original in scope, The Shadow and the Caster is an album that lingers lightly in the memory – the songs are delicate gossamer threads, the words are the edge of a dream. Knowingly multi-syllabic, painstakingly eclectic, it does leave a sense of the volumes of a well stocked library singing softly to one another.