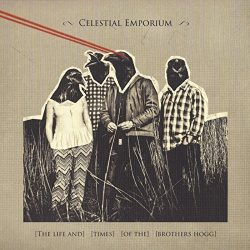 After listening to this record for a week I assumed it had been made by a bunch of hillbilly misfits from somewhere like Harlan County. I was taken aback when I found it came from the same part of the country that had squirted me into existence, North East Lincolnshire. There are of course parallels between the post-industrial devastation of Grimsby and the blighted former coal-mining areas of Kentucky but it doesn’t explain how TLATOTBH came to sound like they do. Straight out of the traps is St Deceiver, which on its own, merits a special mention, a raucous broken-toothed sing-a-long, full of detail like a Donald Ray Pollock short story, the life and times of the disenfranchised high on Oxycontin in dirty motel rooms, the piano played with abandon that makes Jerry Lee Lewis seem like Bobby Crush. If that were their only trick it would be a good one but it’s not typical, what follows is a superb multi-faceted collection of songs that transcend their genesis.

The rush of St Deceiver is followed by the beautiful gentle comedown of Old Crows where hushed acoustic instruments huddle together behind Darren Capp’s vocals that sound like he’s seen enough of the world to be accepting of whatever happens. TLATOTBH are fantastic at loss, at gently probing and exploring those feelings; like a tongue feeling for a cavity, they are drawn to it. Lost is like a Sparklehorse song slowed to a crawl and Hollow Man is more self-reflection, a man lacerating himself in song; these songs teeter at the edge of parody but the sincerity and the performance always pulls them across the right side of the line.

Nena Mager takes the lead vocal for Devil In You, a traditional sounding country song with whiskey and jealousy the enemies of love, and love also takes centre stage on the disarming Fallen For You/Over The Edge. There’s more knockabout fun with the rollicking Cheap Cocaine, which visits the same milieu as St Deceiver with similar results. If I Were King takes a diversion into more traditional folk forms with strong imagery and a sprinkling of harmonies.

The last pair of songs takes the record into different territory. Eve Of The End tells of disaster like the Owl and the Pussycat recast by William Blake and Cormac McCarthy, sound-tracked by acoustic guitars, banjo and the backing vocals of Mager, until the disaster strikes and they perish in a watery grave. It’s followed by Soot And Feathers which spits and bucks like 16 Horsepower with electric guitars lending a crackle and snap, the song ends and then returns a cappella walking like a devil man with his tail in the frying pan. This is a record that is enjoyable from the first moment to the last, it has its own distinct identity, quirks and eccentricities that make it stand out. I left the Grimsby area in search of something different. It looks  like I could have stayed and found it.

If Joe R Lansdale made records, they would sound like this