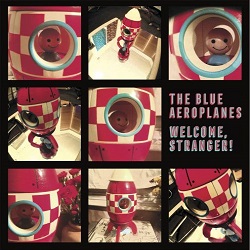 The Blue Aeroplanes return with their most stable line-up to date to proffer up a collection of agitprop poetry set to jangly indie rock. Lead singer, poet and founder member Gerard Langley remains unimpressed by the whole music business model; his thoughts are delivered with an uncompromising aggressiveness – and if the listener doesn’t like it then the listener can take a hike. This is art, and it doesn’t have to explain itself, it doesn’t need to be comfortable – maybe you’ll get it, maybe you won’t, maybe you’ll agree with it, maybe you won’t: either way why should The Blue Aeroplanes care? If this sounds a bit pompous, well the band is not above puncturing that balloon: Dead Tree! Dead Tree! questions the whole nature of poetical metaphors and intellectual detachment against emotional attachment: “In Victoria Park there’s a dead tree (Dead Tree! Dead Tree!) / It isn’t a symbol of anything it’s just a dead tree (Dead Tree! Dead Tree!) / But if they cut it down (Dead Tree! Dead Tree!) / It’ll still mean something to me”.  Of course, as the cross-talking lyrics reveal the dead tree is a symbol for something “there are no tears shed / no tears at all / except when we first parted and I said “I love her body I love her mind I love the ties that bind” / I try to be good I try to be kind I remember where I signed / I never thought I’d get what I asked for so I just don’t know what to ask for…any more”.

There’s a lot of cleverness on Welcome Stranger!, but its cleverness put to good use. There’s also a variety of punchy rock soundtracks, mixed with just as many delicate guitar solos and emotional melodies. Here is the heart of all wild things is the perfect exemplifier of this as the lyrics self-analyse moving from the easy declaration of an activity as proof of fearlessness “she clung to the horse’s back and she was not afraid / she was taken down the old straight track and she was not afraid” to later revisit and dig out the kernel of real truth “she left her home for paths unknown and she was not afraid / Or rather she was but faced it / her path was a true one and she was determined not to waste it”. Such recognition and grasping of one’s own path is so far from the facile pop-culture declarations of “no fear!!!” or “just do it!” – rather it delves into the complexity of real life and genuine personal courage.

Overall Welcome Stranger sounds, unsurprisingly, like REM fronted by a very English Michael Stipe replacement with lyrics that resolve emotional issues by painting introspection on billboards in letters ten feet high. It’s jarring, and funny, and occasionally cuts your feet from under you. But it’s never boring.

The sound of an English take on eighties college rock, with deft lyrics and played like a dream.