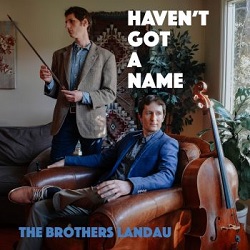 In the pantheon of new-folk-revivalists, which might include the likes of Darlingside and The Milk Carton Kids – The Brothers Landau have created a unique niche for themselves. Safe to say that there are few bands based around a duo of cello (David Landau) and acoustic guitar (Daniel Landau), with both brothers contributing vocals. The presence of the cello gives their sound a sombre classicism, which suits the arrangements of their mostly ironic folk songs which explore aspects of personal and societal growth.

Which sounds quite heavy – and indeed opener ‘Haven’t Got a Name‘ positively requires the listener to write out the words and ponder each emphasis for additional meanings. There’s a sense of a drifting listlessness – boats drift too far from shore, and no-one takes the responsibility of turning things around. The lowest and the highest in the land look askance at events but refuse to name the cancer that’s eating away at interpersonal bonds. There’s more of the same on the lilting banjo flecked ‘Steady Joy‘ which celebrates growth within a relationship “ourselves changing will help each other to grow today together for tomorrow” before dropping acid drops of sardonic wit on those who want just more of the same forever “if you plan to see every ‘Fast and Furious’ movie you’d better better buckle up you know there’s five hundred more to go.”

‘A Major Jerk‘ is a brief almost ragtime-esque depiction of, well, a complete jerk who feels free to do just what they like “I don’t flush the public toilet / And I damn sure don’t wash my hands” but is completely intolerant of others having the same freedoms “what was it that you said / wait it doesn’t effing matter what you said / I don’t like the way you look / and I don’t like what you believe.” It injects some needed lightness, open humour even, into the seriousness of the rest of the collection whilst carrying forward that theme of a society heading for a meltdown.

Overall The Brothers Landau’s approach to songwriting is an almost mathematical exercise – they remain steadfastly emotionally detached as they place a repetitive guitar line here, a sonorous cello break there and pepper the whole with an edifying display of vocabulary. This is, clearly, their intention and they achieve what they have set out to do well – whether it will appeal widely is doubtful, but that really isn’t the point anyway.

The Brothers Landau play it, perhaps, just a bit too smart on cerebral, and slightly dry, release