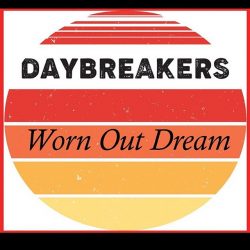 The Daybreakers are a roots-rock band out of Wrentham, MA. ‘Worn Out Dream’ is the band’s second outing, a concept album following the journey of two brothers in a band that doesn’t quite make it. The story covers brother number one, John, leaving home and moving out west to have a go at making it, before coming home and starting a band with brother number 2, John. Billy eventually leaves the band and gets married which leaves John reminiscing on what could have been.

The concept feels a little worn out, and the songs kind of feel the same way, but there’s nothing wrong with that, although by song 4, titled ‘More to Say’ everything has become a little bit too predictable. Verse, chorus, verse, chorus, guitar solo, chorus, end, seems to be a very fashionable form throughout this album without very much attention to detail.

The vocalist, Kyle Murphy, sounds like someone you might find in a karaoke bar or social club on a Saturday night, he tries to force attitude and soulfulness into his voice which takes away from some tasteful guitar playing.

‘Colorado Women’ is a highlight, groovy saxophone lead lines really shine through whilst Murphy’s vocals sound effortless and within his comfortable range, which he should try to achieve more often. The vocal harmonies in the chorus make for an effective lift from verse to chorus.

All in all ‘Worn Out Dream’ isn’t too bad. Hopefully the album and its concept is a bit tongue in cheek, as it starts to sound more and more cheesy as it progresses, however, if you want a little bit of cool rock ‘n’ roll for a little bit of lighthearted listening, then you’ll probably like this album.