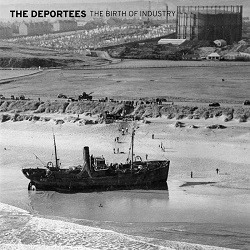 A foreboding vintage photograph of a grounded ship in an estuary adorns the cover of this, the debut release from Scotland’s The Deportees (who, after some momentary confusion, I realised are not to be confused with the Swedish indie band, Deportees… note the absence of the ‘The’). A bleak and arresting image, the photograph is fitting, offering an appropriate visual for the tone struck by the band throughout “The Birth Of Industry” – a desperately sorrowful collection of songs if ever there was.

So, having hit the naval-gazing, indie rock vibe with quite some conviction, it would be easy to dismiss the band all too quickly as peddlers of the kind of misery-jangle we have recently enjoyed from Frightened Rabbit, Admiral Fallow and, during their more reflective moments, British Sea Power. However, as with each of those bands, there is something quite captivating about The Deportees’ knack for a tune and a heart-rending tale. Their songs are not simply insular ditties – by contrast, the songwriting is convincingly observational, erudite and engaging as the small details of day-to-day mysteries of life are unpicked before us: the description of a man standing lonely in a pub is painfully honest; the starkly uncompromising truth that “there is evil in beautiful faces”; the euphoric descriptions of granite stone towns growing from open fields. Indeed this is captivating stuff which paints pictures and tells stories for us that are easy to relate to. Musically , there is also much to be excited about as the band weave the aforementioned and somewhat inevitable misery-jangle through often epic arrangements that grow suddenly from nowhere, stunning four part harmonies that drop into the most unlikely of places, and momentary flashes of pedal steel, fiddle and gentility that fight against frantically strummed acoustic guitars.

The Deportees most certainly are a not easy to pigeonhole – “The Birth Of Industry” is at once folk, rock, indie, Americana and simultaneously several other things too. However, there is little to dislike about this deeply thoughtful collection of absurdly interesting songs. Even the fact that it could be argued into the category of ‘concept album’ is forgivable.