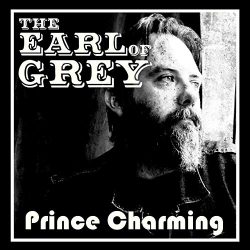 There’s nothing out of the ordinary to see here if you’re reading this from a north London watering hole. Chances are there’ll be a talented Australian singer-songwriter strutting his or her stuff as you sip your Fosters. For a rough around the edges, self-styled proponent of outlaw country you’d be forgiven for seeing the irony of the label, considering Earl Grey is a blend of tea normally associated with the English ‘upper classes’.

Notwithstanding these characteristics, first impressions of ‘The Earl Of Grey’ are of unpolished alt-country. Gruff and quintessentially Aussie, the opening line of ‘Prince Charming’ sets the scene: “The man who came before me, treated you like shit / He set that bar so low I could step right over it”, and the bar is indeed set, for an EP of average Americana – Australia style. That’s not to say there is no room for diversity here. ‘Northern Lights’ has a more commercial, Bryan Adams lite feel with chiming electric guitar and its meandering but familiar lyrics of moving on, leaving behind – classic barroom ballad. ‘Unsaid’ slows things down to a crawl. It’s not going to raise up lumps in the throat any time soon, despite ‘TEOG’s’ best efforts with a slide guitar and a weepy lyric that laments, “All the things I left unsaid / I could put em down on paper, that shit won’t get read / All the things I left unsaid”. There’s perhaps some work to do on the expressions of the heart but it’s early days for ‘The Earl Of Grey’.

The attention turns to a penchant for drowning in fortified wine in ‘Port From A Pint Glass’ and, apologies for letting the lyrics speak for themselves for much of this review but when he croaks “Sometimes tears aren’t enough, to wash away our pain / So we pop a cork or crack a can, mix a drink or sip a dram / And do it all again” then the feeling that we are descending into farce becomes pronounced. Some redemption is offered by final track and single ‘Hollow’ which incorporates superb production within a mature country track, using old fashioned and well-valued arrangement techniques including volume-controlled, dynamic country runs. All of which is given authenticity by the lyric, a tale of regret which hits the spot with just the right amount of subtle angst.

‘The Earl Of Grey’ tells his own life stories in bars and festivals primarily up and down the east coast of Australia. His style is not groundbreaking, however, from what AUK can gather, he has a loyal following and is more than worth catching live. ‘Prince Charming’ is the debut release and, as such is raw. We await developments with interest.

Slow start for the Earl with hints of promise