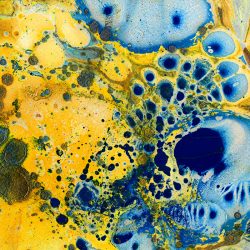 The presidential ‘debates’ show what happens when you match ugliness with ugliness – it spirals into something toxic and is birthing the idiocracy that we seem to deserve. Gareth Bonello meets the ugliness of the contemporary world with songs full of elegant beauty. ‘Rivers of Gold’ is a refutation of the trickle-down theory of economics and it’s a sturdy folk song cloaked with strings that are as elegant and graceful as the flight of a swift. Protest doesn’t have to be as ugly as the thing it is fighting against.

The last time I encountered TGG was on ‘Y Bardd Anfarwol’ which was the result of a study visit to China to explore Chinese folk music. It was a record that was spattered with some beautiful moments. Here he concentrates firmly on Wales but the songs are still looking outwards – the shame of the west’s reaction to the migrant crisis is explored on ‘Bound for Lampedusa’ which is sung from the perspective of the migrants. The music is lyrical, uplifting, the strings are a cocoon of beauty and safety, the brass a welcoming breeze.

It’s a broad ranging record – the opening ‘Gwen Lliw’r Lilli’ is a traditional Welsh folk song with an early morning fog of drones, ‘Un I Sain Ffagan’ is a lovely solo guitar piece – in the primitive/Tacoma style, it gambols forward, notes falling over themselves, like a swirl of kittens at play. ‘Y Gwyfyn’ has the kind of guitar playing and style that has driven Ryley Walker or Steve Gunn into our consciousness, the added strings marking it out as his own. It is a song that is beautiful in any language; pastoral, gentle and good.

Beautiful music as a response to the ugliness of the world