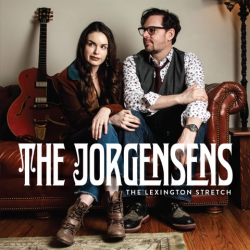 What a stunner! The opening track to this new album is powerful, pure, alluring and thought-provoking. The first note of the a capella voices will bring you to a standstill, and you will have to stop what you are doing and listen. The beauty of Kurt and Brianna Jorgensens’ voices, complimenting one another exquisitely, is a sound to behold and, ‘If the Sea Was Whiskey’, a cover of the Willie Dixon track, is simply stunning. So much so, the rest of the album almost sits in its shadow. Don’t get me wrong, though; there are several more beautiful tracks. Originally made famous in 1928 by Louis Armstrong, ‘St. James Infirmary’ is elegantly played – even if every time I hear it, I have to look out of the window to see who is knocking. To date, there are 476 versions of this song on Spotify so although it begs the question ‘Why another?’ those new to it will enjoy its charm and grace.

Multi-award winning Kurt’s magnificent neo-soul voice takes the lead in most of the tracks with Brianna’s debut lead vocal appearance on this album being track 5, ‘Real Women’. The track showcases her voice but perhaps tries to prove a point that does not need making, in Brianna’s case anyway. She then goes on to take the lead in ‘Sweet Love’ and ‘Voo Doo’, two delightful songs. But, it is the pure and original ‘Chocolate and Coffee Blues’ that does her the most justice and is an entirely superb example of contemporary blues.

Perhaps the track which emerges from the shadow of the opener to the most significant degree is ‘Storyville’. With Kurt taking lead, this cleverly humble and original lyric wistfully relates to the lates and greats of the genre neatly bringing it into the 21st Century.

A charming illustration of contemporary Blues