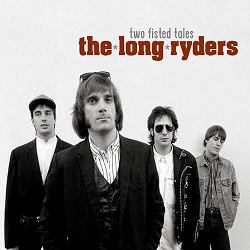 This is a great time to be an admirer of the Long Ryders – not only is the band back together but with this release the excellent series of expanded original albums is complete.   The third – and so far last – Long Ryders album was originally released in 1987, the torturous tale of the process from demoing through recording and then mishandled releasing of which is told by Sid Griffin in the glossy booklet accompanying this sumptuous re-issue. You can read that in detail when you pick up this three disc box-set. Suffice to say that the final part of the story – the wholehearted getting behind the album by the record company – didn’t go exactly to any kind of plan the band might have had in mind.  Even to the extent – shockingly and unbelievably – that the album cover (not the box art shown here) had only been meant as a mock-up prior to a proper photo-shoot.  Ironically, that put them in good – and appropriate – company: the Byrds never meant to release an album called ‘(Untitled),’ the record company just messed that up.

Any subsequent lack of sales is clearly not the fault of the album itself – it comes barrelling out of the gates with ‘Gunslinger Man,’ then careers straight into the Byrdsian ‘I Want You Bad‘ then pushes into ‘A Stitch In Time‘ which shows the Long Ryders mining a seam right alongside R.E.M. who were in the studio with ‘Life’s Rich Pageant‘ and ‘Document’ around the same time. Only it was the Long Ryders who came up with the dramatic mandolin lead history lesson of ‘Harriet Tubman’s Gonna Carry Me Home.’

Again, the second disc of this set is a collection of demos, from three different studio sessions, which not only documents the evolution of the songs on ‘Two Fisted Tales,’ but also proffers versions of songs that didn’t make the album such as the contemporary war story of ‘Flak Jacket,’  and the slow ballad ‘He Can Hear His Brother Calling’ with some nice guitar jangle below the small town tale of despair – it’s got a great Gene Clark feel to it. The final CD of the box set is a live show, this one from Oasis Water Park in Palm Springs. Naturally it predominantly features the new material but there were a few older tracks, such as ‘State Of Our Union,’ mixed in. Overall it’s good quality and well worthy of release.

So, again, this is an album re-release package that can only be wholeheartedly recommended, especially as it’s only a couple of pounds more than the price of a single album. No-one could accuse The Long Ryders of being exploitative bread-heads – even if this might end up being the third or fourth or….time the actual core album has been purchased. Oh, and in case you’ve missed it elsewhere, the back of the excellent booklet mentions that The Long Ryders have a new album out in just a month. The recent reunion gigs have been superb, ‘Bear In The Woods’ was a great teaser track; the stars have finally aligned for the resurrection of The Long Ryders – and we quite literally cannot wait.

Two Fisted Tales - as fine a set of tunes as you'll ever hear. Ever.