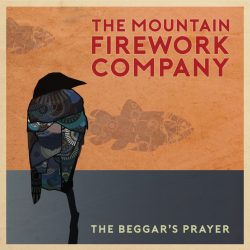 They say that seven is a lucky number. Well, it’s been seven years since The Mountain Firework Company released their last album and, in this case, we’re the lucky ones. The lengthy gestation has paid off in an exceptional album . . . the sort that doesn’t come along very often. There isn’t a spare note or wasted chord. On the other hand, there aren’t any holes. From open to close, the album flows seamlessly.
‘The Beggar’s Prayer’ creates a world, complete with a diversity of emotions and concerns. Inside that world exist too many things to be named. There is a stoic melancholy that wraps it all up and gives it unity. All of the pieces fit together so the illusion is never punctured. It’s cinematic, symphonic, poetic in the broadest sense.

Musically, the album achieves a perfect balance . . . there is a place for everything and everything is in its place. The layering is synergistic and it creates a perfect bed for the vocals of Gareth McGahan and the fantastic harmonies supplied by the rest of the band.

The band moves effortlessly from the unbridled energy of a freight train chugging down the tracks to nimble rags and reels to the most delicately balanced keening. Across all of the musical styles they embrace, the songs contain vital energy. Words really can’t do the album justice . Do yourself a favour and give it a listen.

Is it too early to declare album of the year?