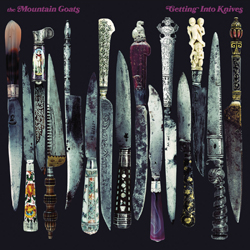 You’ve got to admire the work ethic of The Mountain Goats. Since the early ‘90s, these kooky US indie-pop/folk rockers – essentially a vehicle for singer-songwriter John Darnielle – have put out 19 studio albums, the latest of which, ‘Getting Into Knives’, is their fourth in three years and, impressively, their second of 2020. They certainly haven’t been putting their feet – or should that be hooves? – up during lockdown.

Laid down in March this year, during a week spent at Sam Phillips Recording in Memphis, it was preceded by the galloping single, ‘As Many Candles As Possible’, which, with its thundering ‘heavy metal’ drums, chaotic piano and manic organ – played by special guest Charles Hodges (Al Green) – is actually something of a red herring. More representative of what’s to follow is the jaunty, shuffling, but slightly irritating, Barenaked Ladies-style skiffle-pop of opening song ‘Corsican Mastiff Stride.’

The infectious ‘Get Famous’ is much better, with its warm, soulful Hammond, Stax horns and ‘70s AM radio guitar (Hiss Golden Messenger collaborator, Chris Boerner), as is ‘Picture of My Dress’, a tale of a very early morning encounter at a New Mexico truckstop, which sounds like Belle and Sebastian and namechecks Aerosmith’s soft rock ballad ‘I Don’t Want To Miss A Thing.’

The off-kilter ‘Tidal Wave’, with its woozy clarinet, is slightly jazzy, ‘Rat Queen’ has a majestic, vintage R.E.M. feel, with a towering chorus, shimmering guitars and some mighty organ, while ‘The Last Place I Saw You Alive’,written about the death of a loved one, is very moving – a tender, nostalgic and stately piano ballad.

Some of the album’s best moments come from Darnielle’s dark sense of humour – on ‘The Great Gold Sheep’, he tells us: “I’m going to leave a lasting legacy and when my body’s thrown with great force from a window, the dogs will fight for whatever’s left of me.”

Talking about his band, Darnielle says: “A bunch of people playing together is inherently joyous.” ‘Getting Into Knives’ is a playful and eccentric collection of songs, that’s often enjoyable, but also occasionally irksome. It cuts both ways.