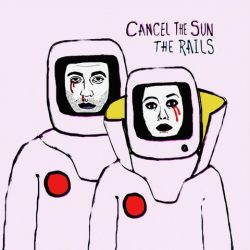 “Something is slipping my mind” Kami Thompson sings on one of the multiple  not-so-hidden gems on ‘Cancel The Sun’. But in fact when it comes to ‘Cancel the Sun’ qualifying as a folk-rock landmark of 2019,  absolutely nothing is lacking at all – and only one track of its 10 is arguably surplus to requirements.

The third album by UK band The Rails, ‘Cancel the Sun’ sits snugly and intriguingly on an unusual Venn diagram intersection between the electrified British traditional music that Thompson’s father Richard co-pioneered in the late 1960s, and a much more modern sounding, guitar-based, kind of indie rock or New Wave.

Thompson and musical partner James Walbourne, whose day job has included spells with Son Volt and The Pretenders, meld these two seemingly disparate genres brilliantly. The opening track ‘Call Me When It All Goes Wrong’ is a case in point, with a guitar-fuelled adrenalin blast of an intro that wouldn’t be out of place on an early Undertones album.  But then when the lyrics kick in, their painfully world-weary and world-wary attitudes stand in stark contrast to the music’s youthful enthusiasm and energy:

“[You’re] Just another ride that I’ve been on,
One that didn’t last too long.”

With a title as resolutely rural as ‘Mossy Well’, it’s no surprise that any indy rock sounds are completely missing on the second track. Instead we’re pitched into the kind of quaint but bleakly depressing personal universe, backed with a lilting folk tune, that every second  Richard Thompson track in the mid-1970s seemed to consist of, as well –  but with a very different, fresh feel to it,  and in a very different musical context too.

“If this is life and life this be
This mortal life is not for me
I cannot feel nor cannot think
I can only curse and drink.”

There is no way you can call ‘Cancel The Sun’ a throwback,  in fact, and not only because of the Indy rock influences or because there are some telling modern-day social concerns on tracks like ‘Dictator’

Another of its many high points is  ‘Something is Slipping My Mind’ a brilliantly constructed account of half-formed, jagged suspicions of a partner’s unfaithfulness, magnified by the gentle, stately poise of the guitar-based tune that accompanies it. That track alone instantly puts ‘Cancel the Sun’ into a class of its own.

The one song that feels like it’s overdosed on its own wry irony is ‘Save The Planet’. For all the music is as graceful and finely produced  as the rest of the album (courtesy of Stephen Street, who’s previously worked with The Smiths and Blur)  its chorus, an invitation to

“Save the planet, kill yourself”

seems more likely to produce a ripple of knowing laughter in its listeners rather than being lastingly thought-provoking about how we should really act to save the world from destruction. Which begs the question, what’s the point of the song?

But this is only one minor gripe in an album that has a massive amount going for it elsewhere.  The final track, ‘Cancel the Sun’, a thundering tale of personal despair that kicks off with a delicate folk melody and which works its way into a full-blown mixture of feedback and crunchy guitars, provides a searing last reminder of that.

Unlikely to be eclipsed on the folk-rock circuit this year