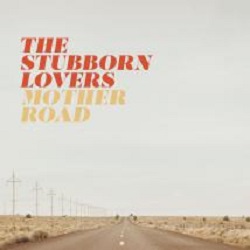 The Stubborn Lovers are a country rock band featuring the lead vocals of Mandy Allen and the lead guitar of Todd Melton who plays up the rock part of the equation. There’s a strong streak of nostalgia that permeates the band’s first full length release ‘Mother Road‘, with lyrics that have a yearning for an easier and less-complicated time. ‘Porch Light‘ sings of a Grandmother’s love, and endless Summer days playing outside – with the reassurance that the titular porch light would always be a guiding beacon home as the night fell. ‘Drivin’ 22‘ paints a portrait of a scrambling time of family shopping expeditions – mum and dad with their mental to-do lists and the squabbling daughters on the back set of the car counting up their pocket money for that important new record by The Who. This backward looking feeling reaches its highest point on ‘Down Stream‘ which starts as an acoustic guitar and vocal celebration of a child’s wonder at the world – but almost imperceptibly builds to a dramatic and dreamy crescendo as the inevitability of ageing and growing progresses. The world impinges, and everything – parents, lovers, friends get washed away down stream. It’s a lovely metaphor and the string section and pedal steel that appears towards the song’s end give a majestic air to the song making ‘Down Stream‘ quite a stand-out track.

‘Mother Road‘ isn’t all nostalgia though – there’s another lyrical strand of determined and capable women living their modern lives. The likes of ‘Whisky Sisters‘ is a slightly tongue-in-cheek embodiment of this “sisters are doing it for themselves” attitude, although in this case what they are predominantly doing is the prodigious drinking of whisky in the company of other “bad-ass ladies“.  Across the album The Stubborn Lovers explore some pretty well mapped territory, but they do it with such panache that it takes on a sheen of originality. Upbeat, positive, striving forward – but touched with some regrets at what has been lost – ‘Mother Road‘ is an easy album to listen to and appreciate.

Mother Road is strewn with M&Ms of country rock – where a hard exterior covers a tender centre.