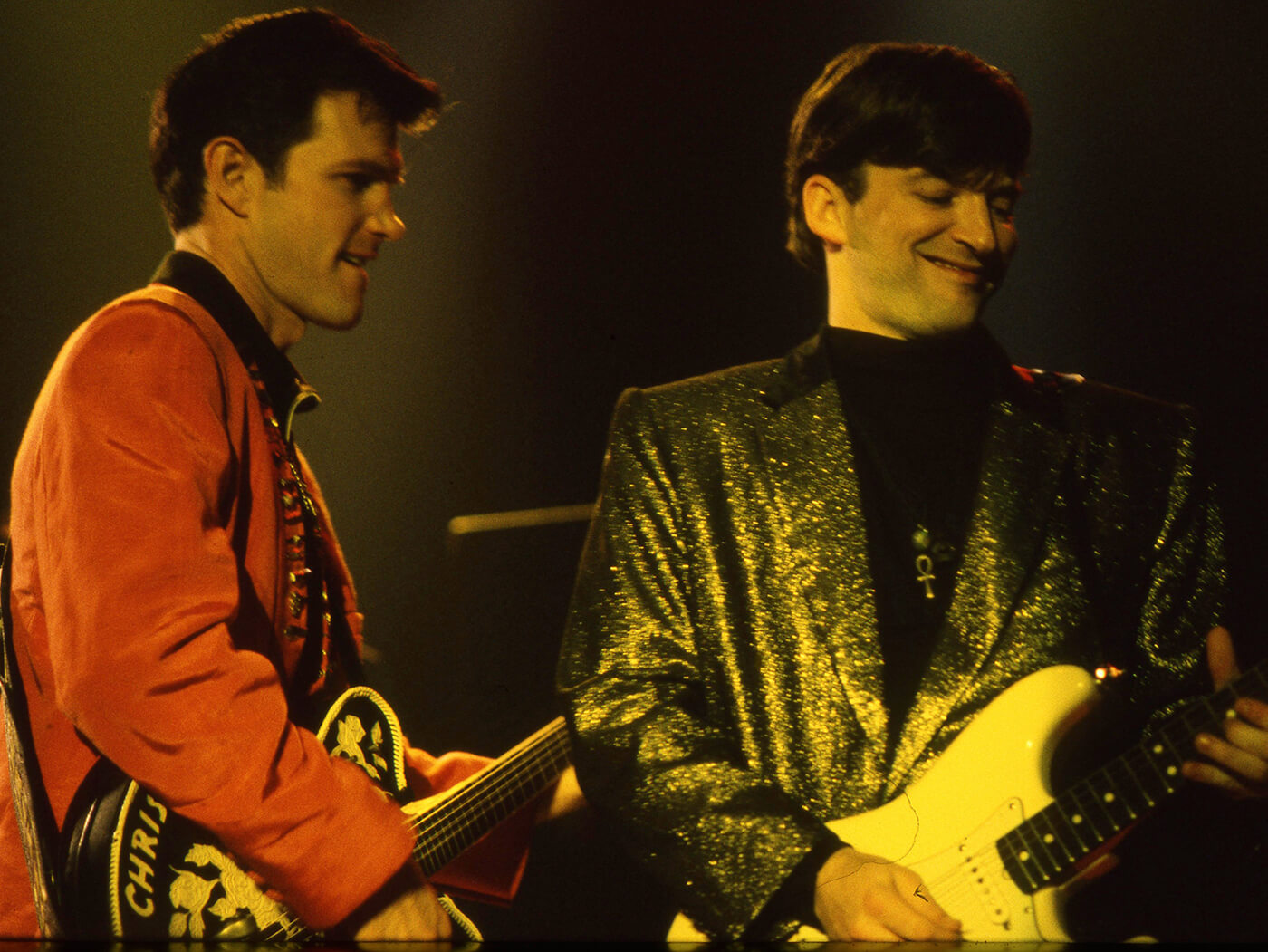 We’re back with another article in our Unsung Heroes of Americana series. This time I’m taking a look at a wayward genius of a guitar player; a man who created a signature sound that will be forever associated with another artist.

Many will look at the name James Calvin Wilsey and think “Who’s he?”, but most people who have listened to music in the past 35 years will have heard Wilsey’s work. One song, in particular, stands out. In 1990 David Lynch released his film ‘Wild at Heart’ and a song from that soundtrack became a firm fixture on radio playlists – and has remained there ever since. ‘Wicked Game’ was the song that really established Chris Isaak and his band, Silvertone. It gave him his first big hit some five years after his first record release and triggered a complete re-assessment of an artist who, up until this point, had struggled for public recognition, despite critical acclaim for his early albums.

‘Wicked Game’ was a Chris Isaak composition – but its overall sound was pure Wilsey. It was Wilsey who composed the songs iconic intro and created its spacey feel. A master of the “less is more” approach to guitar playing he was a fascinating if flawed, character who’s work will be forever associated with the man who started out as a musical soul mate but would come to be, in Wilsey’s opinion, the albatross hung around his neck.

Born in Logansport, Indiana in the July of 1957, Wilsey was a Forces kid and the family moved around a lot as he was growing up, finally settling in Florissant, a small town to the north of St. Louis, Missouri. He started playing guitar in High School, though it was never a big deal to him, he was always more fixated on art and it was that passion that took him to the San Francisco Academy of Art in 1976 and where he would start to get involved with the local music scene. Wilsey has cited guitarists such as James Burton, Scotty Moore, Duane Eddy, Billy Strange and Hank Marvin as influences, so it comes as something of a surprise to learn that his first forays into live performance were with a punk band and on bass guitar! Wilsey joined local punk band The Avengers; as he told the story, he approached Penelope Houston, who fronted the band, and asked if they wanted another guitarist, she said no but asked if he played bass, so he said yes – never having picked one up before. He sold his guitar, bought a bass and joined The Avengers the next day. Having switched from guitar to bass he was playing the instrument in a different way to many other punk band bass guitarists and it got him a lot of attention. Klaus Flouride, bassist with one of San Francisco’s most prominent punk bands, the Dead Kennedys, was one fan of Wilsey’s playing – “Jimmy Wilsey of the Avengers was a young musician doing really interesting stuff that was really supportive of the song. He would do octaves, a simple but a really good idea, and I took that and ran with it with the Dead Kennedys.” ( From an interview with the online site MusicRadar).

When the Sex Pistols played the Winterland, in San Francisco in 1978, The Avengers were the band chosen to open for them. This was seen as their big break, with Pistols guitarist Steve Jones offering to produce a recording session for the band but, even with Jones’ support The Avengers were unable to secure a record deal and apathy and discontent set in; songs from that session wouldn’t see a release until a few months after the band had called it a day, playing their final show in June 1979. Jimmy Wilsey was looking for a new gig.

In 1980, Chris Isaak began commuting between Stockton, where he grew up, and San Francisco. He put together a rockabilly trio he named Silvertone, after the guitar brand. The band specialised in rockabilly covers, playing songs by Gene Vincent, Carl Perkins and others and Mark Plummer, Isaak’s manager at the time, knew of Wilsey and wanted to get him into the band. Although Wilsey and Isaak got on well from the start Wilsey seems to have been reluctant to join the band, originally offering to be their sound engineer instead, but he would spend a lot of time showing Isaak lead guitar riffs and a strong bond started to form between the pair. Isaak has said that he liked Wilsey from the first time he met him, that he was one of the funniest guys he’d ever met and particularly quick-witted. Wilsey jammed with Silvertone a couple of times and this was enough to convince Isaak that he should move into a rhythm players role and bring Wilsey into the band full time as the lead guitar player.

The two musicians quickly became a strong unit, dropping the original rhythm section from the band and working together on songs and demos to define the Silvertone sound. ‘Wicked Game’ is the song that everyone remembers but, if you listen to their earlier albums, ‘Silvertone’ and ‘Chris Isaak’ you can hear that Wilsey influence right from the start and the way they were developing their sparse, dreamy and atmospheric approach to the music. Listen to tracks like ‘Voodoo’ from the first album and ‘You Owe Me Some Kind of Love’ from ‘Chris Isaak’ and you can track a straight line to ‘Wicked Game’ as they build their sound and Wilsey refines his guitar tone, a tone he referred to as “Nitro Twang”. Wilsey himself said that he could reproduce his sound using any standard Stratocaster guitar and a Fender Silverfaced amp (he used a 1964 Fender Deluxe for the ‘Wicked Game’ recording) but it was never as simple as that. For all their retro look and covers of fifties rockabilly music, the band were early adopters of advanced digital technology and music software and Wilsey’s equipment included a custom MIDI set-up that allowed him to trigger string and keyboard sounds with his guitar. Wilsey wasn’t secretive about his sound and would willingly share his wider knowledge of the technology; in the ‘90s he was a consultant with Apple and he had frequently shared his knowledge and details of how he got his sound with members of online musical forums. 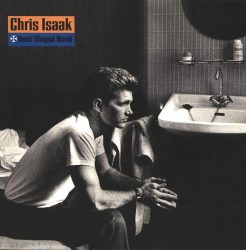 The band’s first two albums didn’t sell that well and, when ‘Heart Shaped World’ was released in 1989, it looked like they were heading for a third strike; but David Lynch’s ‘Wild at Heart’ was released in 1990 and it changed everything. Lynch was a fan of Isaak & Wilsey’s work and had included a couple of songs in his earlier film, ‘Blue Velvet’, but these hadn’t attracted the attention that ‘Wicked Game’ would bring down. The single, and the album it came from, both went into the Top 10 of the charts and gave them hits around the world, albeit well over a year after the album had been originally released. It should’ve been the start of real success for Isaak, Wilsey and the band, and for Isaak it was. Unfortunately, the partnership that had built so well was now starting to come apart. Wilsey had started to use drugs in the early ‘80s and quite quickly developed a serious habit which was to have an effect on his personality. He and Isaak had talked about forming a formal songwriting partnership and this is something that probably should’ve happened. Isaak was the main writer but many of the songs are driven by Wilsey’s sound and the clever licks and fills he used to embellish them; a master of the “less is more” approach his solos always sound exactly right. Known to his many fans as “The King of Slow” his guitar parts sound languid and unhurried yet never drag or limit the songs. As the San Francisco Chronicle rock critic, Joel Selvin, said of the Wilsey sound, “the vision may be Isaak’s; the sound is Wilsey’s”.

This perceived lack of appreciation for his part in the band’s success seemed to prey increasingly on Wilsey’s mind. To be fair to Isaak, he has always acknowledged the importance of his guitarist’s contributions but heavy drug use is often linked with paranoia and poor judgement and Wilsey increasingly saw his musical partner as controlling and hogging the glory. There was one more album together, 1993’s ‘San Francisco Days’, but Wilsey was becoming increasingly unreliable, missing rehearsals and forgetting chord progressions and guitar parts for the songs. No-one seems sure if Wilsey was fired from the band or if he quit but, not long after the release of ‘San Francisco Days’, one of the most creative partnerships in Americana music was over.

Chris Isaak has gone on to release another eight studio albums over the years along with a number of compilations and, as many will know, has also had a very successful acting career. Things didn’t go so well for James Calvin Wilsey. He continued to struggle with drug addiction and it increasingly took its toll on what had been a considerable talent. After leaving Silvertone, Wilsey briefly formed an instrumental band, the Mysteries, but it was short-lived and there were no recordings. 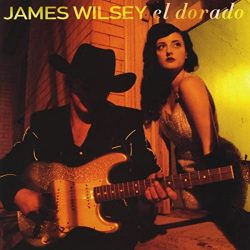 He did make one solo album; in 2008 he dropped the Calvin from his name and, as James Wilsey, released the instrumental album ‘El Dorado’, a strange mix of surf rock/rockabilly and tracks that sound like music from a spaghetti western. The signature Wilsey sound is still, very much, in evidence but the structure that Isaak’s songs gave to his playing is missing and the album failed to attract much attention.

After some three decades of fighting on and off heroin addiction, Wilsey finally succumbed to the inevitable and, on Christmas Eve, 2018, he died from multiple organ failure as a result of hepatitis and drug use. He was just sixty-one.

In researching this piece a picture emerged of a highly creative, intelligent and witty guy, much loved by the people who came into contact with him. He created some amazing music, though he’ll always be associated with that one song, ‘Wicked Game’; a song that reached Number Two on the Billboard Top 100 and went Top 10 in nine countries; it has appeared on singles and albums that have sold more than 5 million copies. It has been used in TV programmes, films and been covered by many diverse artists. It’s not a bad legacy to leave.

James Calvin Wilsey is a true example of the sideman; the unsung hero who helps to create a signature sound without ever really benefitting from it. Isaak has used that sound to build a successful long term career, which is only fair since he wrote the songs; but they wouldn’t have been the same without Wilsey’s signature sound and, it would be fair to say, Isaak has never hit the same creative heights without Wilsey at his side. Who knows what they might have achieved if they’d continued to work together.