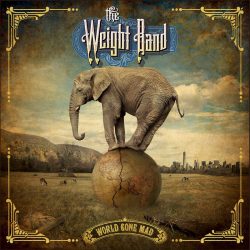 Populated entirely by members of (later versions) of The Band and/or follow on/split off bands, The Weight Band are exactly what you would imagine – a band keeping the spirit and music of their legacy alive by, well, playing the music of The Band, if not the actual songs, then very close approximations of them. Neither a covers band nor precisely a tribute act, they carve a niche as a bequest group, but a mighty fine one. All the individuals are top class, and play and sing lovingly and enthusiastically together.

The album is officially dedicated to Levon Helm, Rick Danko and Richard Manuel, the flavours of whom all wash through. Title track ‘World Gone Mad’ is wisely used as the lead off, and is given freshness by some gorgeous mandolin work. After this, though, the rest of the songs, whilst reverent, seem to blur in their Band-ness, including the obligatory Dylan cover, though this tight outfit are clearly enjoying their historical romp. Older Band devotees will love this, but later Americana fans could be directed to ‘Danko/Manuel’ for a more modern spin on their legacy, Jason Isbell’s live versions of his song even more powerful than his Drive-By Truckers original. Anyone considering playing this again might be tempted instead to listen to ‘The Weight.’ By The Band.