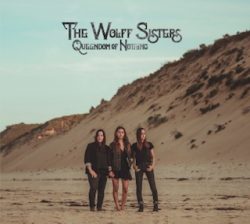 From listening to ‘Queendom of Nothing’, the third full-length album from Boston’s The Wolff Sisters, you get the impression that they’re a restless bunch. On the opening song, the moody and twangy country-rock of ‘Drive’, they’re asking to be taken down to the river and then driven through the mountains, while on the poppy ‘Come Back To Me’ they’re ‘on a sailboat ride under the indigo sky’.

Their wanderlust doesn’t let up – on the guitar chug of ‘Burn Out’ they’re going to ‘drive all night in the Mississippi moon’, and the title of the Southern-fried, bluesy ‘Train In The Valley’ speaks for itself, as does the final track, On A Road.

Sadly, the journey that this record takes the listener on is often an arduous one, with nothing much to take in on the way. Things get off to a good start with ‘Drive’ – the strongest song here, but, over the course of the whole album, The Wolff Sisters  – Rebecca (acoustic guitar), Kat (keys) and Rachael (electric guitar) fail to shift out of second gear.

The songs are pleasant – high on harmonies, melodic, well-arranged and easy on the ear – and there’s some great musicianship, like the groovy organ solo on ‘Sparrow’, the haunting piano on the atmospheric ballad ‘Took Me Down’ and the desert-rock lead guitar on ‘Lie Lie Lie’, but the child-like lead vocals soon become tiresome, there’s a lack of variety and depth, and with the recurring references to travel and landscapes – mountains crop up a lot – you can’t help but feel that you’re going round in circles.

‘Queendom of Nothing’ is a nice place to visit, but you wouldn’t want to stay there.