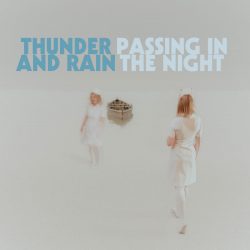 Is it folk?  Country?  Bluegrass?  That’s not an unfair question to ask yourself when listening to ‘Passing In The Night’ the latest (and third) album from hard-working Colorado outfit Thunder and Rain.  Featuring main band members Ian Haegele on bass and with Dylan Mccarthy and Allen Cooke doing sterling work on mandolin and dobro respectively, they provide a great platform for the band’s main songwriter and singer Erinn Peet Lukes to showcase her vocal talent.

There are some great songs on this release and despite posing the question as to which genre it falls under at the start of this review, it soon becomes clear that labels don’t actually matter as it’s just consistently good music.  This fusion of styles is one of the real strengths of ‘Passing In The Night’.  Take ‘Walk Right Through the Door of My Heart’ as an example, for the first few bars you are taken back to a 1950s (almost) honky-tonk country style but it morphs unmistakably into something modern and bang up to date before transitioning into the next track ‘Down a Rabbit Hole’ which, with a bit of a stretch of the imagination, has echoes of First Aid Kit.

There is more clever work on display with the second track ‘Two Ships’ which manages to combine some direct lyrics about an impetuous and impromptu relationship (and the regret experienced the following day) with a jaunty bluegrass melody which is driven along wonderfully by some really nice work by Aaron Youngberg on banjo.

Looking back at Thunder and Rain’s earlier releases, it’s easy to see the progression of their musical style, and it certainly is an evolution rather than a full-blown revolution, as they have adapted from a more traditional bluegrass and folk sound to something that is now much more contemporary.  It combines elements of the 1950’s old-time country mentioned earlier to something that is more akin to a (mini!) wall of sound, which is quite an achievement given the fully acoustic instrumentation!  Erinn Peet Lukes has a beguiling and engaging voice that holds all the songs together and with some high-class musicianship from the rest of the band, the end result is a fine album that seems to improve with every play.

Thunder and Rain have built up a good following both in their native US as well as in the UK and Ireland where they have toured extensively over the last couple of years.  In a musical field that is pretty crowded, they are managing to be that little bit different and it’ll be interesting to see which direction their music takes in the future.