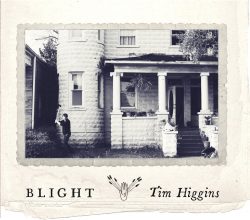 Tim Higgins’ debut album ‘Blight’ is a dark and almost depressing album in many ways, but showcases a unique singing voice and is an interesting look in on the ever-expanding Americana scene. The album itself was written by Higgins in a decaying Victorian Mansion and if you could put a sound to that, you would have Higgins’ music exactly.

The album starts with ‘The Quitter’, and we are introduced to Higgins’ unique voice. The song itself feels very heavy, each beat feeling forced. But the meaning of the song feels more important: ‘I used to be a winner, now I’m just a quitter’. The then repetition of ‘Maybe God don’t love me’ is extremely emphatic, creating a powerful statement of himself.

The title track ‘Blight’ was included on ‘Rolling Stone Country’s Best New Music’ list and has an extremely powerful sound. It’s almost hard to describe unless you listen to it yourself, but it’s low and atmospheric and feels like you should be watching something grand at the cinema while it’s on. ‘I Blew It’ is another miserable song for an altogether miserable album, and involves an apathetic narrator against futile odds.

Even the happiest song on the album, with the nice harmonies and upbeat guitar, ‘Every Day Is Not a Party’, is about exactly that. Here however we do get to hear clearly Higgins’ raw great voice which he previously has received great acclaim for.

But the joy doesn’t last for long, with ‘Take Me Away’ being an almost suicide-note and ‘White Youth’, which angrily crescendos against privileged white complacency in the Trump era after the 2015 Charleston mass shooting at the Emanuel African Methodist Episcopal church, and “Winter”, the artist’s reaction to ecological disasters, namely the 2010 BP oil spill and its unseen long term ramifications rounding out the album.

Whilst the album is ultimately very dark, it is clearly written as a way of getting a message across about modern society. The musicianship is brilliant and his sound is effortlessly unique. But you truly need to like the negativity which is almost Lana Del Rey like in many aspects, but even darker.