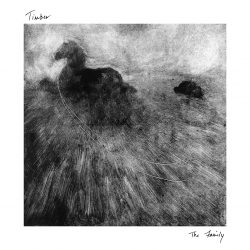 ‘The Family’ is the debut release from Nashville-based Alabama duo, Timber. Formed almost by coincidence when Janet Simpson of the Delicate Cutters was recommended to Will Stewart of Willie & The Giant as a potential contributor, the collaboration went so well that they decided to write together, which led to the formation of this new project. The record begins promisingly with the melodic ‘Burying Ground’, as Stewart’s effortless croon combines with Simpson’s accompaniment on a beautiful chorus. The result is an alt-country classic in waiting.

Timber does not stick rigidly with an americana sound on their debut, and when they do venture further, it leads to interesting results. The 60s-inspired psychedelic riff which carries ‘Colors’ is a highlight, while there is a shoegaze-y drone which permeates ‘Sunstroke’ behind the refrain of “got to get you out of my head before it’s too late”.

It is when Timber play it safe that they are at their poorest. The Simpson-led ‘As A Kill’ meanders aimlessly, and ‘Downtown’ is downbeat and very little else. Timber do change the mood on the upbeat ‘Shuttlecock’, on which Simpson’s vocal dominates the track with a Stevie Nicks-esque cool, before she sings with a quiet defiance on the delicate balladry of ‘Move’, which closes the record.

On their first release as a duo, Timber has shown enough to justify themselves as more than a mere one-off. With a little more experimentation, which yields the best tracks on this release, they could very well be onto a winner.