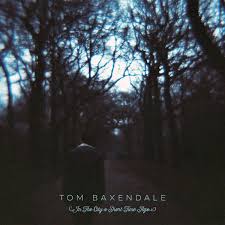 nother slice of new American Americana drifts into town on the back of half written melodies and unsympathetic production that buries the vocals behind a sheen of dulled instrumentation. Surprising really as Tom Baxendale has self produced this ‘not brilliant’ advert for his songsmithery. There are snatches of decent ideas and some lovely guitar passages but the overall feeling is of a smidgen of self indulgence overriding a sense of quality control.
‘Red Rag’ is a case in point. Not a great song wherein the vocals follow the guitar lines to weave the narrative. Baxendale’s voice is not strong enough and the song sounds half formed as it stumbles its waltz time to the end.

Perhaps having recorded and mixed every part of the album Tom lost all sense of perspective and eventually lost control of what he intended to achieve. It is this lack of insightful self review that reverberates most which is a shame as the nuggets of good are tough to find in the maelstrom of retro guitar pop. ‘Straight Face’ is one of them with its insistent beat and call and Inspiral Carpets tones. Shame, it could have been good I suspect – maybe next time.