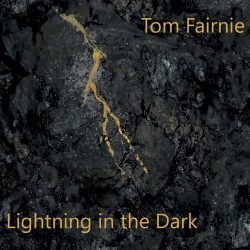 Tom Fairnie refers to his music as ‘Celticana’, which is a fair summation of his blended Americana influences and Scottish roots. The bagpipes solo kind of give it away right at the beginning. To cement this claim, Fairlie raised enough money to record this album in Austin, helmed by former Nitty Gritty Dirt Band/Chris Hillman Band member Merel Bregante.

Tom’s no pale youth, and his singing voice is something of a Prine-esque croak, but it sits very nicely with the laid back acoustic sounds and sharply crafted, pathos-loaded lyrics. The record starts strongly – ‘Isn’t That the Way’ nails the Celticana vibe – reflecting on life’s contradictions in a cheery, folksy manner. ‘If You Go West’ is more intimate and wisdom-of-ages. It’s somewhere close to beautifully sad. ‘Sleeping on the Streets of New Orleans’ mixes hard luck stories, played in a minor key, with jazzy interludes – it works really well and cements Fairlie’s bold opening stanza. Titular track ‘Lightning in the Dark’ is a cheery ‘damn you Mr Hangman, I’ve lived my life’ refrain, powered by driving fiddle. ‘Better Times’ is a strong slice of bleakness and loss, a suitable track to herald the second half (Side 2 Track 1) of the record. All across these twelve tracks the arrangements are excellent, almost perfect. So much so there’s even a flavour of Cash ‘American Recordings’ about the whole record. Coming from this writer, that’s very high praise.

However, the album as a whole meanders a little in its second half, the songs aren’t quite as strong (‘Lightning All Over Sunnyland’ is somewhat clichéd in its roll call of blues legends). The old guy wisdom angle is repeated a little too much, although ‘A Quiet Life’ bucks the trend and ‘Liberty’ is a high watermark that draws the record to a conclusion (particularly when the full band kicks in unexpectedly). Had Tom stopped at eight or nine tracks, the whole record would be a true banger. It’s still pretty good – the first three tracks are superb.