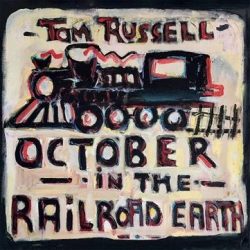 It takes some sand to put out an album that shoots for “Jack Kerouac meets Johnny Cash in Bakersfield”. Tom Russell’s extensive resume and impeccable pedigree notwithstanding, it’s a high bar to set. The songs on his new album ‘October in the Railroad Earth’ easily sail over that bar. The album’s title track is borrowed from a lyrical poem by Kerouac and serves as both a reflection on and restatement of the urgent search that drove the beat poet. The final track is a return to the first song Russell ever learned, Johnny Cash’s ‘Wreck of the Old 97’. But it’s worth considering whether the album’s larger than life book-ends are merely points of contrast for the most pressing matters taken up in between.

Taking Russell literally, it is easy enough to envision Cash singing the title track to Kerouac. In doing so, it is equally easy to identify the centrality of the question “what’s fame really worth” to the album that follows. The second track on the album, ‘Small Engine Repair’ was written as the title track for an Irish film but it serves as the perfect transition point from the question Russell poses to Kerouac into the album’s search for answers. It is a deftly crafted snapshot of a life lived in obscurity but lived nonetheless with dignity, pride, hopes, and frustrations. Russell captures the stoicism that is at the centre of the main character’s repeated offer: “one day turn around, prices are fair”.

‘T-Bone Steak and Spanish Wine’ brings us along for the ride when the singer stops in to visit a place he hasn’t been for decades. The owner recognizes him immediately but sadly, though the special is “carved in stone on that old chalkboard sign”, the canyon has changed, the crowd has changed, and now “the music is all just background noise”.

‘Isadore Gonzalez’ examines the question of fame’s worth by recounting the tale of a Mexican cowboy who lies buried in England after a mishap in Buffalo Bill’s Wild West Show. ‘Red Oak Texas’ approaches it through the tale of twin brothers, forgotten war heroes who “learned how to fight but not how to heal” and faded faster than the tales of their deeds. ‘Back Streets of Love’ listens in as a couple tries to navigate their life together and the pursuit of their dreams. They ultimately conclude that lost is exactly where they’re supposed to be.

The stand-out track on the album is ‘Hand-Raised Wolverines’. It steps away from the theme of fame and its costs but still speaks directly to it. Set against the background of polite conversations on a swiftly tilting planet, Russell balances poetic lyricism with dark humour. “All the rhetoric and craft beer morality” doesn’t add up to much when you’ve been “locked inside a cage with hand-raised wolverines”.

‘Highway 46’ takes a wide view of roots and kin as it reflects on Merle Haggard, Buck Owens, Spade Cooley and Wynn Stewart in a wish to be “in Bakersfield tonight”. ‘Pass Me the Gun, Billy’ is a “true family tale . . . a Cowboy song” that draws the edges in closer. ‘When the Road Gets Rough’ finds Russell and his wife stuck in traffic with the band on the way to the next gig. He tells us that you “earn your pay on those 8-hour drives” but that it beats the alternatives.

By the time the album delivers us to the cover of Johnny Cash, the story of a man who let his own reputation and other people’s expectations determine his decisions with a catastrophic outcome serves as a clear capstone on the album’s explorations of the subject of fame.

A fantastic album from an exceptional songwriter