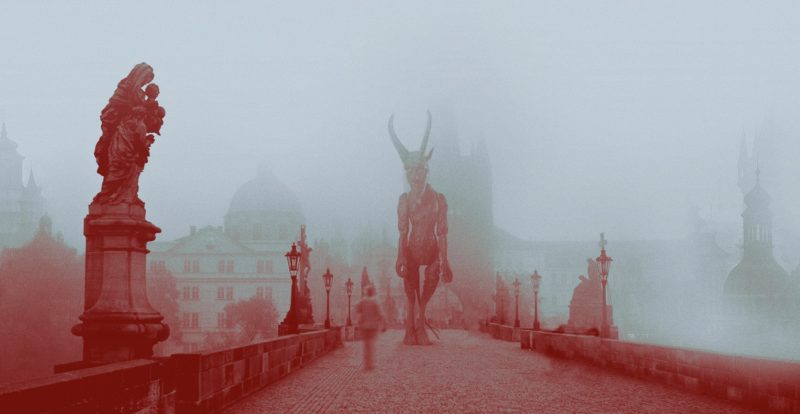 Prague in the 1990’s, a time between the Velvet Revolution and the rise of mass stag night tourism – this is the era evoked by The Tiger Lillies on their new album ‘Devil’s Fairground‘ which is released this coming Friday.  It’s a time that the band – Martyn Jaques (vocals, accordion, piano, uke), Adrian Stout (double bass, theremin, singing saw) & Jonas Golland (drums, percussion) – relate to as they were there.  They found a city of exceptional hedonism which they happily joined in with, but there was the down side of  legless drunks, bored hookers and fatherless children.

Martyn Jacques reflects on the time recalling it as “the beginning of the band. It was a magical time, the bars were full. There were so many squats and parties, booze and drugs — but no tourists. This record’s filled with the people I knew at the time.”  It wasn’t all peaches though, as he adds “Lots of them are dead now. Heroin addicts and junkies.”

The music the band makes is in keeping with this wild time, they’ve been described as the “godfathers of alternative cabaret” but on ‘Devil’s Fairground‘ they expanded their sound by recording the album live, back in Prague, with  a full orchestra.  The depth of music this enabled The Tiger Lillies to produce is shown to great effect on ‘Tombstones‘ which is being premiered here , which evokes the melancholy side of that 1990’s experience – a literal wander through a graveyard which foreshadows the deaths of those friends and acquaintances yet to happen.  As Jacques adds “Tombstones’ is a song about the great leveler, death. We all end up in the cemetery and it doesn’t make any difference what you do in life because that’s where we go.”