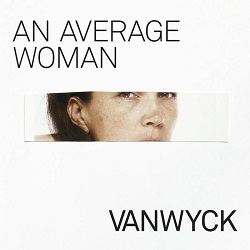 VanWyck is an Amsterdam based singer who has tried out a number of different musical genres on her path to this intimate album of confessional songs. It’s a wildly varying CV taking in classical piano, rapping, playing with a jazz dance band, and being half of a trip hop duo. The classical piano and perhaps a few jazz influences apart none of this earlier history impacts on An Average Woman which may be the new direction or another branch on VanWyck’s musical tree. The former is to hoped for as this is an album of some depth, musically and conceptually, which marks VanWyck as a singer that it is hard to ignore.

Opening with the title track VanWyck lays out her musical stall for this album – her dark alto strikes a conversational tone, it has a smokey feel to it as it describes with a slightly sultry slurring the wide variety of types of women before defining herself “And I, I was an average woman / I tried to do good, and I tried to be kind / And I kept my head above water…most of the time”. The musical accompaniment starts off stark – deep bass notes and a rolling acoustic guitar and stabs of electric guitar and builds with soft swirls of organ and melancholic strings. The absolutely gorgeous Listen to you Breathe goes even simpler with just delicate piano and swooning strings – it’s a tense song shot through with longing and, worryingly, a suppressed sense of potential violence. There’s darkness too on Don’t Talk to the Captain, for all that it boasts a fuller arrangement, and also sees VanWyck lift her vocal out of the darkness to let it sparkle a while as she duets with Marjolein van der Klauw. There’s a sense of brooding doom about this nautical journey “sure we like being on board / but we all just want to get home, soon” sits worryingly with the Captain’s obsessions “he’s got a troubled mind / he’ll tell you of his great love / and how she set his soul on fire”.

VanWyck has produced an album of intriguing depth, a dark and gloomy world of disturbing love and an ever present sense of lurking oppresive outside forces. Who can tell if this is the musical direction that will stick – one can only hope so as this is a rich and mysteriously rewarding album that is like an early morning conversation with a talkative stranger in a cafe-bar you probably shouldn’t, on sobering reflection, have stumbled into.