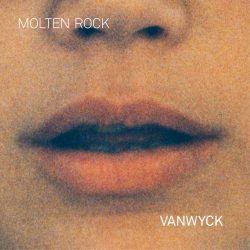 Following on from the success of her debut album ‘An Average Woman’ in 2018, Amsterdam singer-songwriter VanWyck brings us ‘Molten Rock’, an album dealing with the complexities, paradoxes and even the duplicities that make us all human. She says that “if ‘An Average Woman’ was the album I had to make, then ‘Molten Rock’ is the album I really wanted to make”. Thank goodness for that, for it is really rather good.

There are a number of obvious influences peppering the songs (especially Leonard Cohen), but this is no bad thing. A feature of VanWyck’s style – her breathy vocal – is evident from the opening track, ‘Supermarket Line’, which reflects on the general minutiae of life and how little control we have over events as they take place all around us….”these are the ways of the world / there ain’t nothing you can do about it girl.” The first of the strong Cohen influences appears on ‘Lead Me On’ with its slow, steady pace and a gently tinkling piano, which helps to highlight the overall light instrumental touch….but then, it is a folk album after all.

Having said that, ‘Rock Carver’ is a little beefier, and certainly one of the standout tracks – good pace and well delivered, getting to a heart locked up “in a fortress made of stone” but never fear, her “blade is sharp”. A slower, almost old time country pace accompanies ‘Make of Me’, and ‘Carolina’s Anatomy’, the first single release, celebrates the female form from a female viewpoint. The song was inspired by a friend dancing in a Berlin nightclub, almost oblivious to the rest of the world, talk of “twisting hips” and “twirling legs”, lost in the dance.

‘High School Gym Wall’ has lots of twangy, echoey guitar, and that breathy vocal: “They painted your picture on the high school gym wall / your hair following in the wind / your smile to die for”. This middle section of the album becomes just a tad same-y, nothing particularly strong, although ‘Breakfast Room Revelation’ is more melodic than those tracks either side of it.

The breathy vocal on ‘Like An Ambush’ becomes even more pronounced, almost Ute Lemper-like, but is a beautifully made song, slow with an atmospheric use of synths. There is a strong finish to the album with ‘The Rock Steady Creeper’, which starts as a gentle standard folk tune, but finishes with an almost anthemic close….”Ain’t nobody gonna read your mind / ain’t nobody got that kind of time”, and ‘Molten Rock’, imagined as a volcano….”My heart is soft like molten rock / pumping blood in gushes, it rushes through my limbs”.

‘Molten Rock’ is a lyrically rich collection of songs, with a light touch, exquisite harmonies and interesting phraseology to relish. It flattens a little in the middle with perhaps not enough style contrasts to enjoy all the way through, but that doesn’t detract from the fact that this is a fine effort indeed.

About Russell Murphy 41 Articles
Can't get enough of this Americana stuff. Live or recorded, it's all good to me....