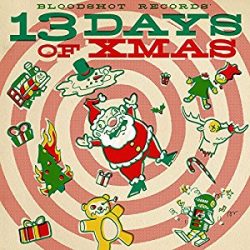 Christmas comes but once a year and for the country community it’s the perfect excuse to drip an extra tear into the beer and mourn another year of lost love and lonely hearts. 13 Days Of Xmas is a compilation of artists with one thing in common – the festive season blues. The relish which Bloodshot Records upholds the tradition of good ‘ol guys and gals in the gutter certainly stays true to the Western character. Bloodshot have served the alternative music community out of Chicago since 1994 and are this year offering up an Americana album of various label family members along with their usual festive bargains. It’s touted as a “Thirteen-song compilation of off-kilter original Christmas songs and unlikely covers” and the darkness is there for all to see (sic).

A re-release of O Holy Night by Murder By Death opens the album and immediately the slow on the uptake are caught unawares. However sombre the mood that surrounds this track, it is in fact a Christmas carol with all the joyous significance that goes with it. Are these deliberate diversion tactics meant to unman reviewers?

It’s not all doom and gloom though, even though Jon Langford And His Men Of Gwent take country cheese to unwelcome levels of parody not seen since Bosshoss covered Conway Twitty and Ruby Boots’ I Slept Through Christmas barely breaks through the production glitter baubles.  But the second half of the record settles things down somewhat and Dark Christmas is a heady brew of instrumental gothic twang by the Dex Romweber Duo, better known Stateside than here perhaps but definitely worth checking out for his dark rockabilly punk sounds. Georgia’s Kelly Hogan of Neko Case fame brings the first truly tear-jerking, old-timey performance with Blue Snowfall, her fantastic voice and simple but oh-so effective backing group showing such a smooth sense of assurance, reminiscent of the old backing bands of the late Fats Domino and the golden era. Devil In A Woodpile come rushing down from the mountains next with the hilarious The Pagans Had It Right. Upright bass and banjo take centre stage for these western swingers as they ponder how “Baby Jesus shoulda lawyered up, put a trademark on his pram/ The pagans had it all figured out, the bucks rained through the land”.One word – Deliverance.

As we near the end of this seasonal serving we arrive at the nitty-gritty. Enter Pittsburgh’s rustbelt emigrant now settled in Nashville, Zach Schmid got the call from Bloodshot while in a bar and got to writing the most stereotyped, awkward, midwestern Christmas song out there and guess what? He nailed it. I’m Drunk Again This Christmas with its sozzled lyrics and sweet lap steel guitar make this album worth the cover price alone. Yes there’s a few stocking fillers in here but I guess Bloodshot wanted everyone to be represented in keeping with the Christmas spirit and all power to them for it.

Down And Dirty With Those Christmas Bloodshot Blues.