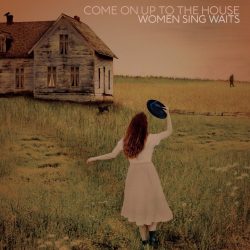 Tom Waits is an oft covered songwriter, perhaps surprisingly so for such an individual artist. Everyone from The Ramones to the Carolina Chocolate Drops have taken on Waits songs at one time or another. This new tribute album produced by writer and musician Warren Zanes features a cast of female singers who bring some individual interpretations of some well know and less covered highlights of Waits catalogue.

Oregon trio Joseph turn ‘Mule Variations‘ song ‘Come on up to the House‘ into an early blues ballad. Corinne Bailey Rae does something similar with ‘Jersey Girl‘. You can almost imagine Ida Cox or Bessie Smith singing this. Phoebe Bridgers version of ‘Georgia Lee‘, another ‘Mule Variations‘ song is one of the highlights here. Another unexpected later period song ‘You Can Never Hold Back Spring‘ is taken on by Jazz singer Kat Edmondson. Her Billie Holiday influenced voice suits the song as does the sparse guitar and keyboard backing. With singers like Patti Griffin and Roseanne Cash turning in unembellished performances of ‘Ruby’s Arms‘ and ‘Time‘ respectively the quality of Waits songwriting shines out of this album. The closest the album gets to wrong notes are surprisingly Aimee Mann and Iris Dement who are perhaps trying to stay too close to Waits own interpretations of ‘Hold On‘ and ‘House Where Nobody Lives‘. Inevitably ‘Downtown Train‘ appears and Courtney Marie Andrews does a decent job of laying the ghost of Rod Stewart to rest. The Wild Reeds Tom ‘Traubert’s Blues‘ closes the album. The flow of the record may have been bettered with these last songs swapped.

With five songs coming originally from ‘Mule Variations‘, two from ‘Heartattack and Vine‘ and the rest spread across Waits career perhaps the song choice could have been more rigorous and some of the standards passed over. But that is a small point when each performance brings a fresh perspective to some great songs.