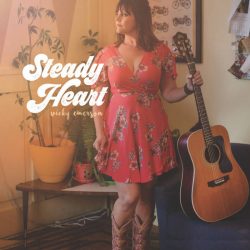 The cover of Vicky Emerson’s new CD ‘Steady Heart’ is a picture of a strong and confident woman. It is those qualities that are apparent in her music. A level of self-assurance means that inside you will find a relaxed and warmly understated offering musing on relationships and love.  A steady heart indeed. This is in great part due to the quality of her voice, which manages to be both pure and seductively smoky at the same time; it draws the listener right in. This is aided and abetted by some quietly sympathetic violin (OK fiddle if you will) and bass playing. How often does acoustic bass add a dimension that electricity just fails to provide?

It’s apparent on investigation that this is a woman committed to the issues of her gender; this might be a relatively low key offering but it does not obscure the presence of conviction. The point is made that Emerson has taken on duties beyond that of writer and musician, all of which seems to be a statement of autonomous intent regarding her music.

This is Emerson’s fourth album and it is apparent that she spreads her musical interests far and wide, performing as she does with Sarah Morris, under the name of Home Fires (which on first listening seems to be musically a little more up-tempo than this offering, indicating a laudable diversity). She also jointly runs the Front Porch Music Group which is designed to support other singer-songwriters.

Reviewing other people’s music is an interesting business but being a consumer of those reviews must be even more so?  Having done a little research I was led to believe that Emerson’s cover of ‘Don’t It Make My Brown Eyes Blue’ is both the best and worst track on offer. What did please me was that it was thought redolent of Peggy Lee’s version of ‘Fever.’ Nice to know that my ears have not completely given up on me. My view is that I think you will love what she does with this track and for me it is the standout.

Not many lyrics or lyricists transcend their musical accompaniment (Leonard Cohen was after all a published poet before he seriously turned to music) and this album is a case in point. Whilst Emerson seems to be lauded for her qualities as a wordsmith they do not readily stand alone. The most telling metaphor is that of the brown eyes turning blue, though it is hard not to be charmed by the thought of being taken “coast to coast” on her imagined boat. What you will find is that the voice and the lovely accompaniments lift the lyrics to a higher plane, bringing things to life and making this a very worthwhile buy.

One thing you might question is how much material is on offer. This is a short CD and whilst there is no benefit in discs crammed with substandard filler 34.56 would generally be considered far from generous on vinyl?

Integrity filtered through a beguiling and engaging voice