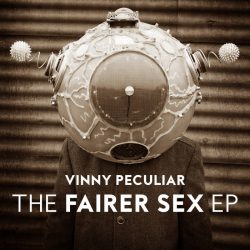 Who is Vinny Peculiar? Is he a poet? Musician? Philosopher? Explorer of societal mores? Well, he is all of these things and more. He investigates areas of societal belief and invites you to do the same.“Silver Meadows” (Fables from the Institution) delved into mental health and this tasty morsel looks at gender-related identity. A concept E.P. of four tracks, it investigates gender typecasting, webcam sex, sadness, loss and humiliation. His words do not bludgeon or rant at you but rather, gently creep up and whisper in your ear. Gain your attention gently, tease you into taking note.

I Came Back As A Girl looks at reincarnation as a woman with all the ensuing stereotypical assumptions. House of Girls – views of underworld webcam sexual activities. ‘No Reply’ is a gentle ballad accompanied by piano and is about loss and the final track, Trial by Lingerie, recounts the embarrassment felt by a man in a chain store’s lingerie department.

Yet again, Vinny Peculiar produces songs that on the surface seem whimsical but have a much deeper message to convey. He does this with clever lyrics and solid musical accompaniment. Yet again, he delivers. A musical commentator on today’s socio-cultural and gender political social constructs. A gem.

Another jewel from Vinny Peculiar’s treasure chest of wordsmithery